In this Episode: Everybody gets blown to smithereens (digitally). 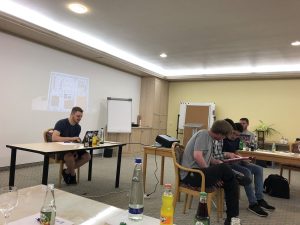 Those team events are often paired with team-building exercises, causing possibly uncomfortable situations with your co-workers or let you find out things you never wanted to know about them. That’s at least what every comedy involving such an event leads us to believe. So for the breaks between remembering what we did well and not so well since our last DEV Retreat we had a game of “Keep Talking and Nobody Explodes“: The only game released since 2000 to require a manual, it’s also great fun.

The method for retrospection did not change much from last time but we had better sticky notes this time, which helped! We started off with a general assessment of our well being and mood and I am happy to report nobody was too grumpy. This was followed by thinking back what had happened, which projects did we do, what has changed and our unfinished business. Surprisingly a lot of us remembered not only big releases of Icinga 2, Icinga Web 2 or other larger projects but also small things, like our Trainees first merge, taking a break from PHP in favor of JS or making a brochure to advertise apprenticeship at NEWTAYS. 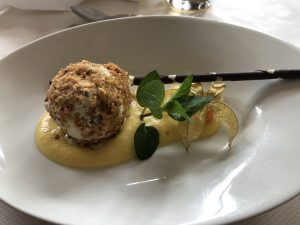 After making concrete plans on how to improve with out team dinner was served. The Hotel had a habit of making the portions a bit smaller than some would have liked but after the dessert nobody was hungry anymore and ready for a mellow evening with Gin and Tonic.

Of course not all is happy, rainbow and unicorns. But there weren’t any problems we aren’t confident we can solve. Except what to do for our next DEV Retreat. But our colleagues went for a round of arrow tag, maybe we’ll steal that idea for next time.