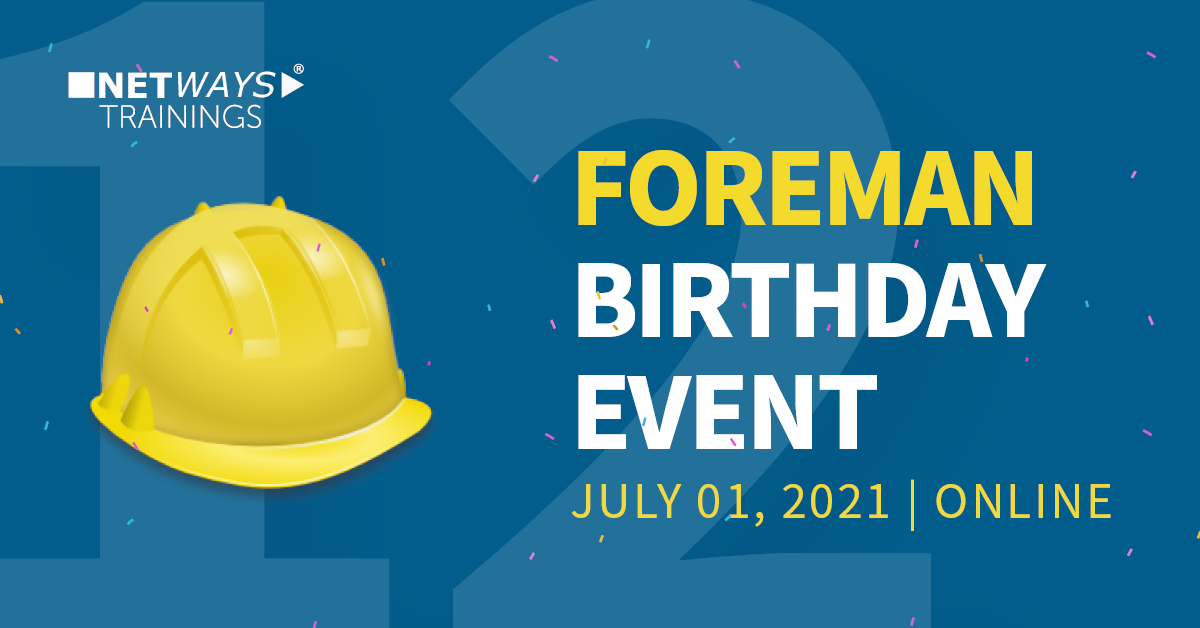 Last week on Thursday we had the Foreman Birthday event and I can proudly say it was a big success. So lets talk about two things in the blogpost, first about the event itself and second about the organization of the event.

A Foreman Birthday event traditionally consists of multiple talks including a Q&A and the social part which is a great coming together by beer and pizza and usually there is also some cake involved! For organizing the event we teamed up with ATIX, so we share responsibility hosting the event every other year and support each other while doing so. With them doing a great job moving the event online last year because of the pandemic, it was clear to me the event had to happen this year, too. The idea of an hybrid event was also dismissed quickly so also all social activities had to be online only.

So to get the talks together I did the typical mix of asking former speakers, making a public announcement, asking others I hoped they would perhaps give a great talk, asked Melanie and Bernhard to ask internally at Red Hat and ATIX, thinking about doing a talk myself, considering a kettle prod to motivate colleagues and this resulted in a great diversity of ideas. So choosing the actual talks had nothing to with finding the best one, but with picking a good mixture of relevant topics for Foreman and Katello users, addressing users and developers, having something likely new to many and updates on topics that matter most.

Now our NETWAYS Events team had some experience with online events with stackconf, a three day conference on open source infrastructure, being the biggest one. So when asked for recommendations one was to have the talks pre-recorded which I happily followed, but for more community interaction I still wanted to do live Q&A in addition to the included web chat. Thanks to my colleague Christian I had some nice guide to give to those speakers who never did a recording before. And all speakers delivered, one early, one in time, three after a reminder last minute and one with a delay, but having all except one allowed me to publish a schedule. I included some small breaks and an intro and outro, but as I was the only moderator it kept it rather short.

For the actual event Christian helped me to setup everything in OBS and map it to a stream deck, so I only had to push buttons, but it was still pushing the correct button at the correct time! So with every message I got more and more excited but also nervous as I recognized I will have a big, excited audience and everything was so well prepared that I was the only one who could mess up. 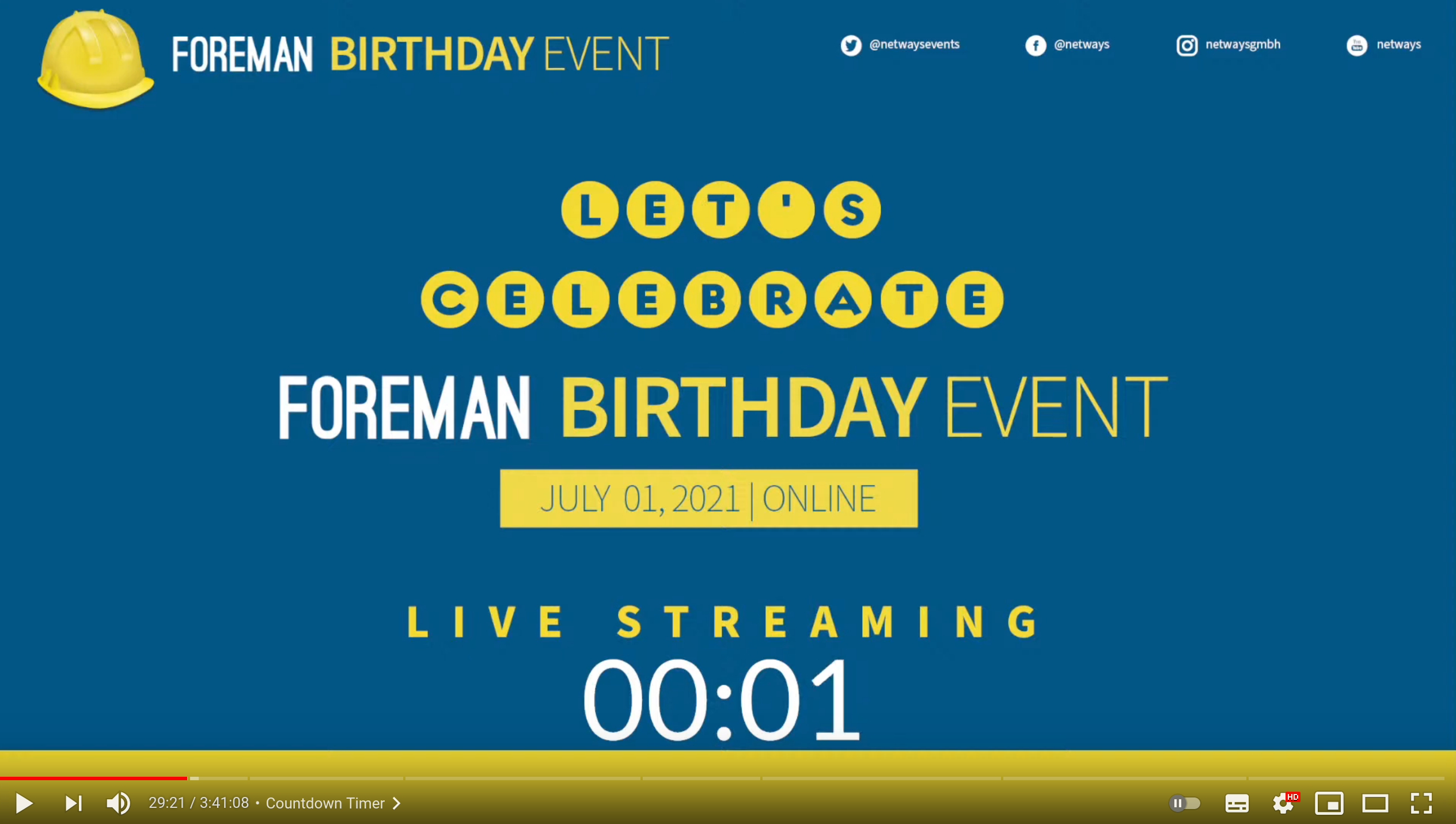 If you watch the recorded event at youtube, you will know what I mean. But you can also directly jump into the first talk from Manisha Singhal “Deploying servers in an Application Centric Way” where she introduces the Foreman plugin Application Centric Deployment which allows to deploy all the systems required for one application using Ansible. If you want to dive deeper into it also her example deploying an Elastic Stack and official documentation is available.

The second talk was by Matthias Dellweg of the Pulp project who gave “Pulp 3 introduction for Katello users – exploring the backend and tracing issues” which will hopefully help many Katello users in the future. The cli got directly packaged and included in the repositories on the event so you can directly try Matthias tips.

The third one is a great example for the community involvement in the project as Maria Agaphontzev did a “Demo and Feedback session for the new Job invocation wizard”, so there was directly the option to influence the future of this part of Foreman. If you still have some feedback for her, you can comment on her pull-requests or in the community forum.

In “Katello for Debian based systems: Update and Outlook” by Quirin Pamp you can learn about the state for Debian support, why development was slowed down and how they will get it going in the future. It looks like some small steps are still needed for feature parity to RPM support, but there are already plans to not stop there like adding support for source packages! If you are interested you can even join the discussion.

An always welcome talk is the “Red Hat Product manager update”. This time it was done by Dana Singleterry who told us about the plans Red Hat has for future development and as everything of this has to happen in Foreman, Katello and Pulp the community will directly benefit from this. And for the live Q&A Dana joined from the co-driver’s seat while traveling! This is some great commitment!

And last but not least Lukáš Zapletal told us “The story of webhooks plugin” which was a great mix of story telling and technical talk ending by him playing Happy Birthday on the piano. So watch this talk even if you are not using the Foreman plugin hooks at the moment and not thinking about using webhooks and shellhooks in the future! And if you already think answering questions from the co-driver’s seat is great commitment, then Lukáš is also over the top here because he had a garden party including a live stream of the event to celebrate Foreman’s Birthday and was answering questions from there! 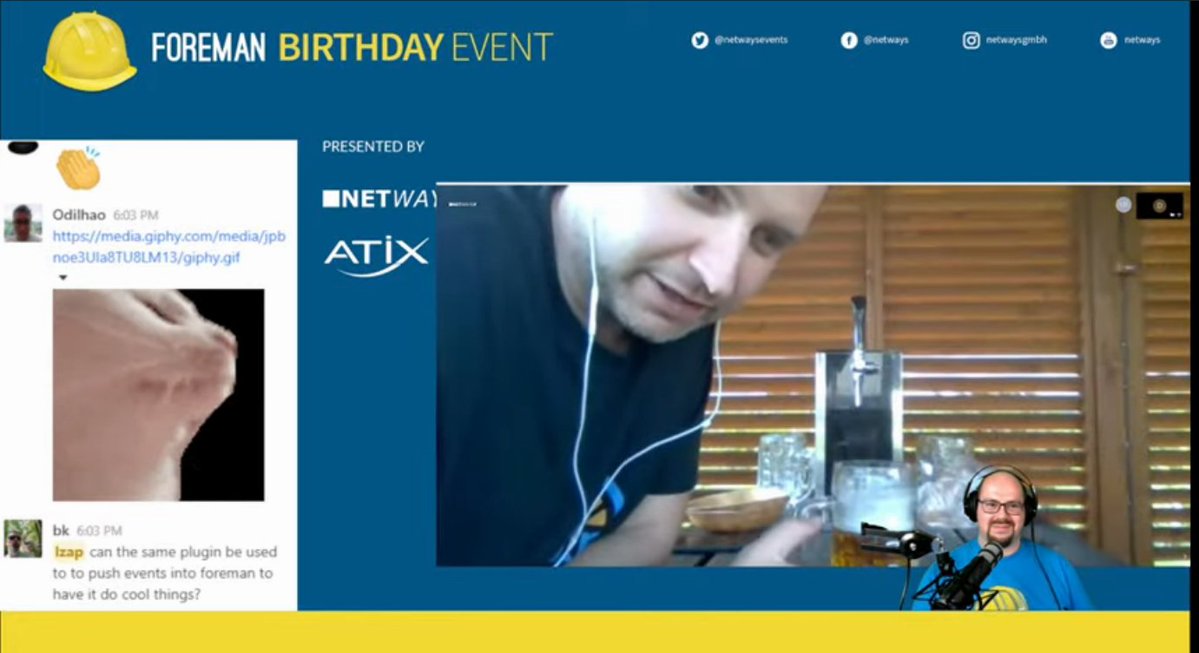 But as I said having great talks is only one aspect and depending on your preferences even not the most important which brings me to the social event. As I do not like online conferences very much, I wanted a social event as near as possible to a normal conference and when asked our Events team told me they have planned something called workadventure for stackconf. So after a look into, I committed myself to the solution and just wanted to get feedback how it worked out on the much bigger conference. Because of me waiting on the feedback and other time limiting factors it was not possible to build a new setup for the Birthday Event, so I asked about re-decorating the one from stackconf what our Webservices team did. 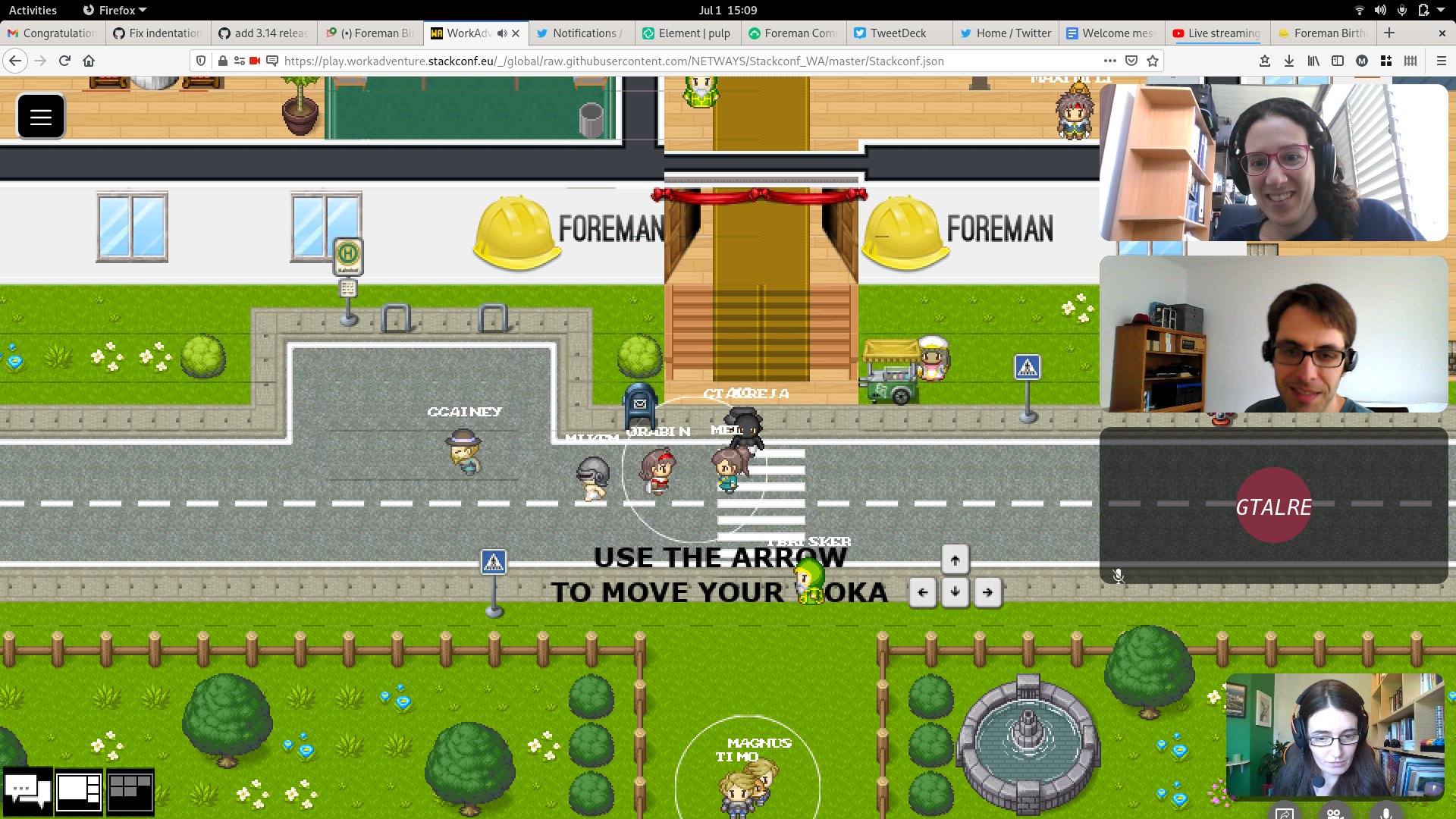 So while I did the stream more and more people used workadventure to connect and I was told people really enjoyed it. There were message popping up like „Melanie is stalking people“ or „It is like a really conference I am missing out on talks“, so I think I reached my goal! And when I joined after the livestream I could still talk to people about 2 hours long until the last one left.

So from all the feedback I got the event was a great success and as I was only the one who brought all the pieces together my thanks goes to our Events team and Christian for their support and help, our Webservices team for the technical parts like the chat instance and workadventure, the speakers for their talks, Melanie and Bernhard who helped me with getting speakers, also Melanie, our and ATIX Marketing team for promoting the event and of course every one attending the event and making it such a great experience.

So I hope in-person events will be a thing in the near future and the Foreman community can come together next year on FOSDEM and Config Management Camp like we did before the pandemic and I am looking forward to next year’s Foreman Birthday event which will be hosted by ATIX again!

On July 1, 2021 we have the pleasure to celebrate the birthday of one great open source solution: the Foreman is turning 12! Happy anniversary! Together with our friends from the Foreman Project and ATIX we organize a one-day event to celebrate and dive into the...