As always OSMC started with the workshop day. This time the topics were Prometheus given by Julian Pivotto, Gitlab by Michael, Terraform by Lennart and Foreman by me. After the workshops with coming together for dinner and some drink social networking started, one of things I enjoy most at conferences nowadays.

Day one started also like every time with a warm welcome from Bernd. Quite unexpected for me was the high number of first time attendees who raised hands when Bernd asked. It is always great to see new faces! 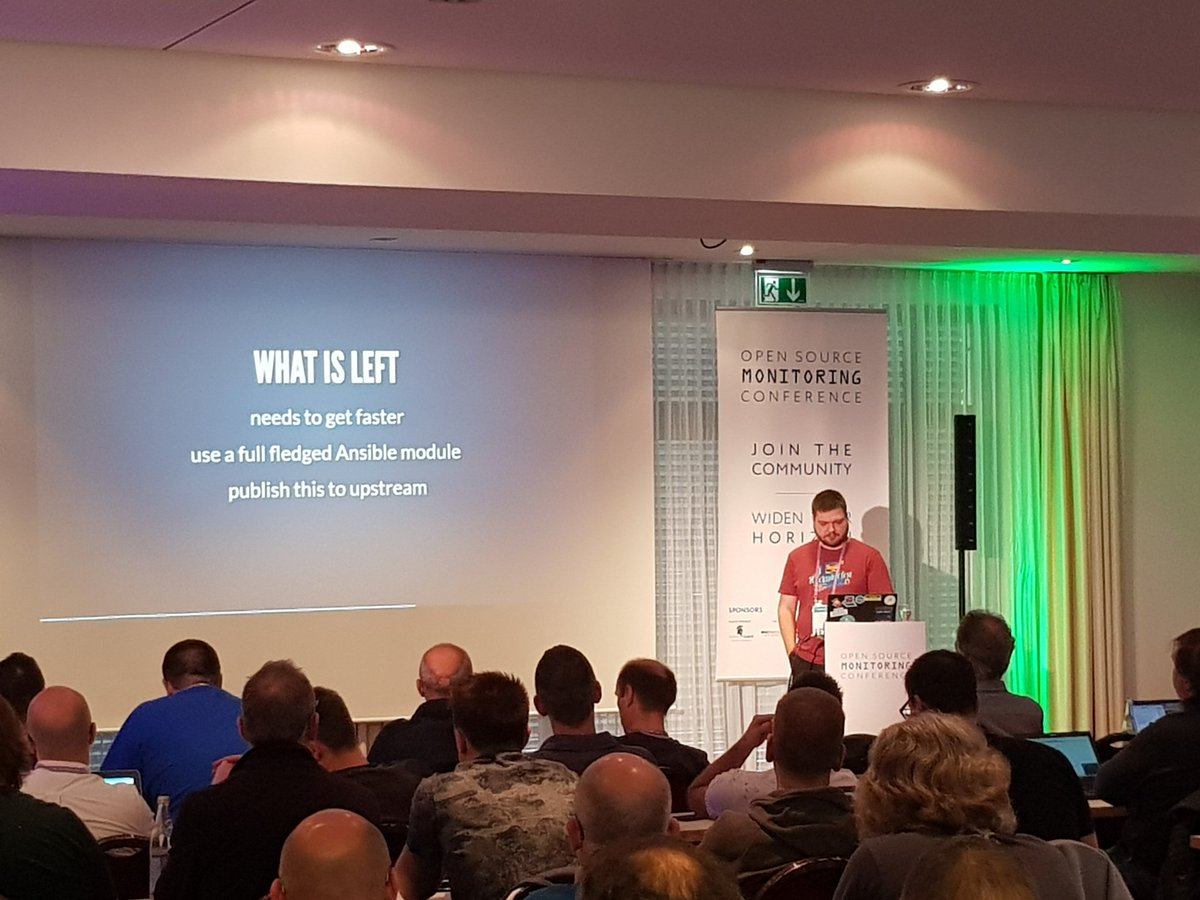 First talk I attended was “Directing the Director” by Martin Schurz who gave some insights in how the monitoring platform developed at T-Systems Multimedia Solutions GmbH over last years. So they scaled up from single system, solved migration from VMs to Docker of the monitored environment and built knowledge to provide consulting to the teams which run 94 different projects which have to be monitored. With so many different things to monitor the next step of course was automation where all the good from Icinga-Director-API and Ansible came together. But if it is easy for users to build monitoring objects, configuration will grow which comes with the next challenges to make it even more easy and error prove. And from what Martin showed they solved it in a good fashion, but future will tell and I hope he will give another talk providing an update in the future. 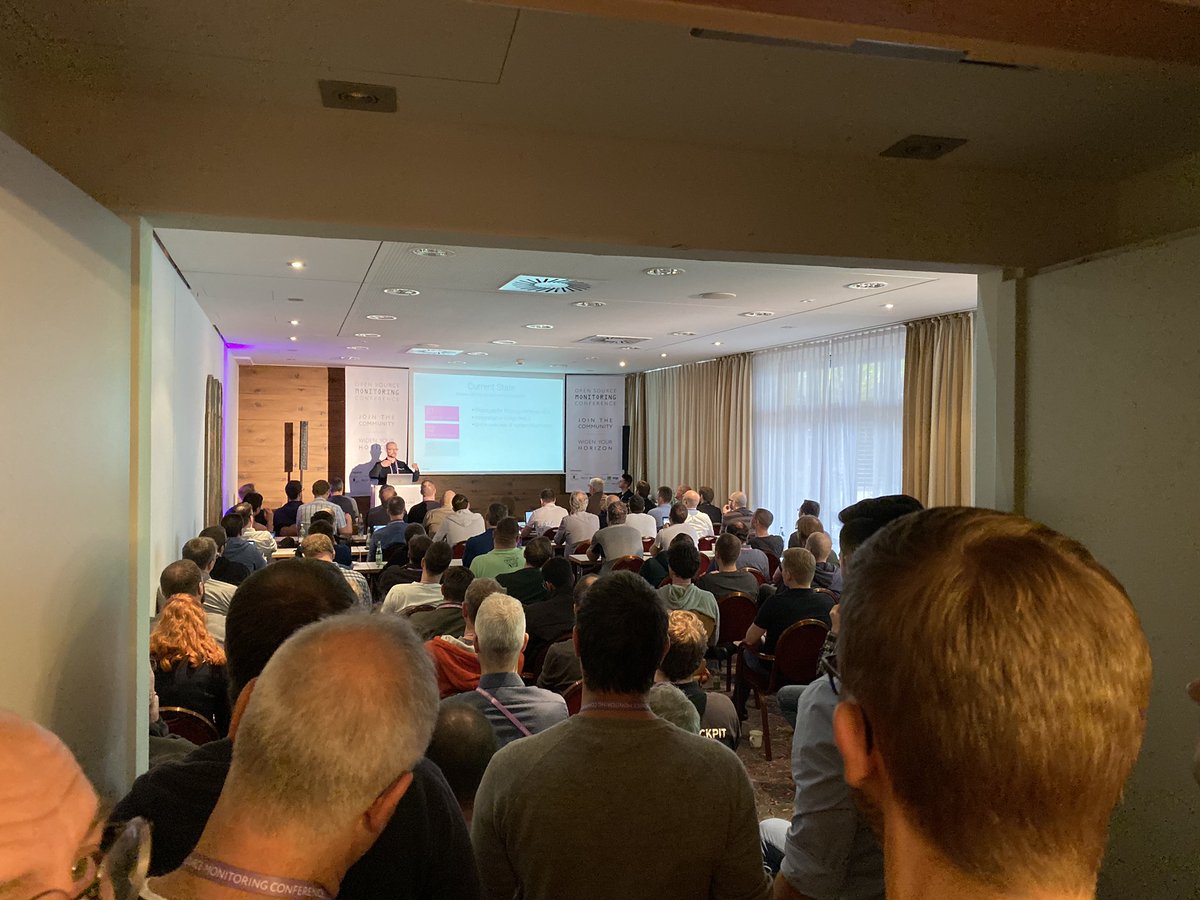 Second one was Christian with “Windows: One Framework to Monitor them all” who introduced his precious to the crowed. If you could not make it into the crowded room or was not at OSMC at all, have a look at the documentation or the framework itself, the plugins, the kickstart script to get it up and running the background daemon. In a great live demo he showed all the components and explained them in depth. While it is still the first release candidate it looks very promising.

Marcelo Perazolo from IBM Systems was talking about “Monitoring Alerts and Metrics on Large Power Systems Clusters”. He started with an introduction to the Power architecture and the workloads it is specially useful to make everyone familiar with it. The example he used was a big one, the Summit supercomputer. The main topic were two projects CRASSD and Power-Ops which not bring the data from some systems not everyone is familiar with to commonly used tools but also include Ansible playbooks for automation and flexibility “instead of just providing a docker container”. The demo showed some Kibana dashboards which provided in-depth data summarizing the health and performance of Power Systems starting from firmware to service running on it. 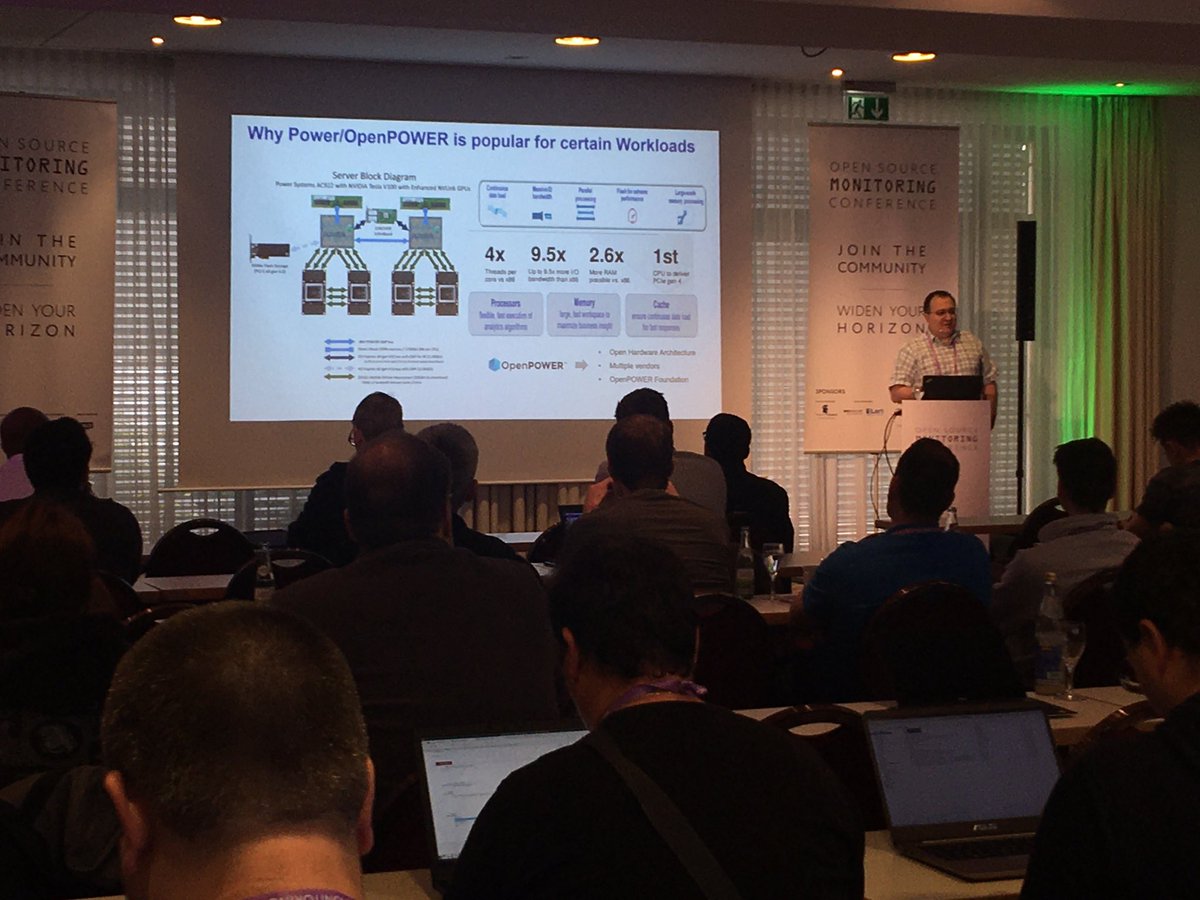 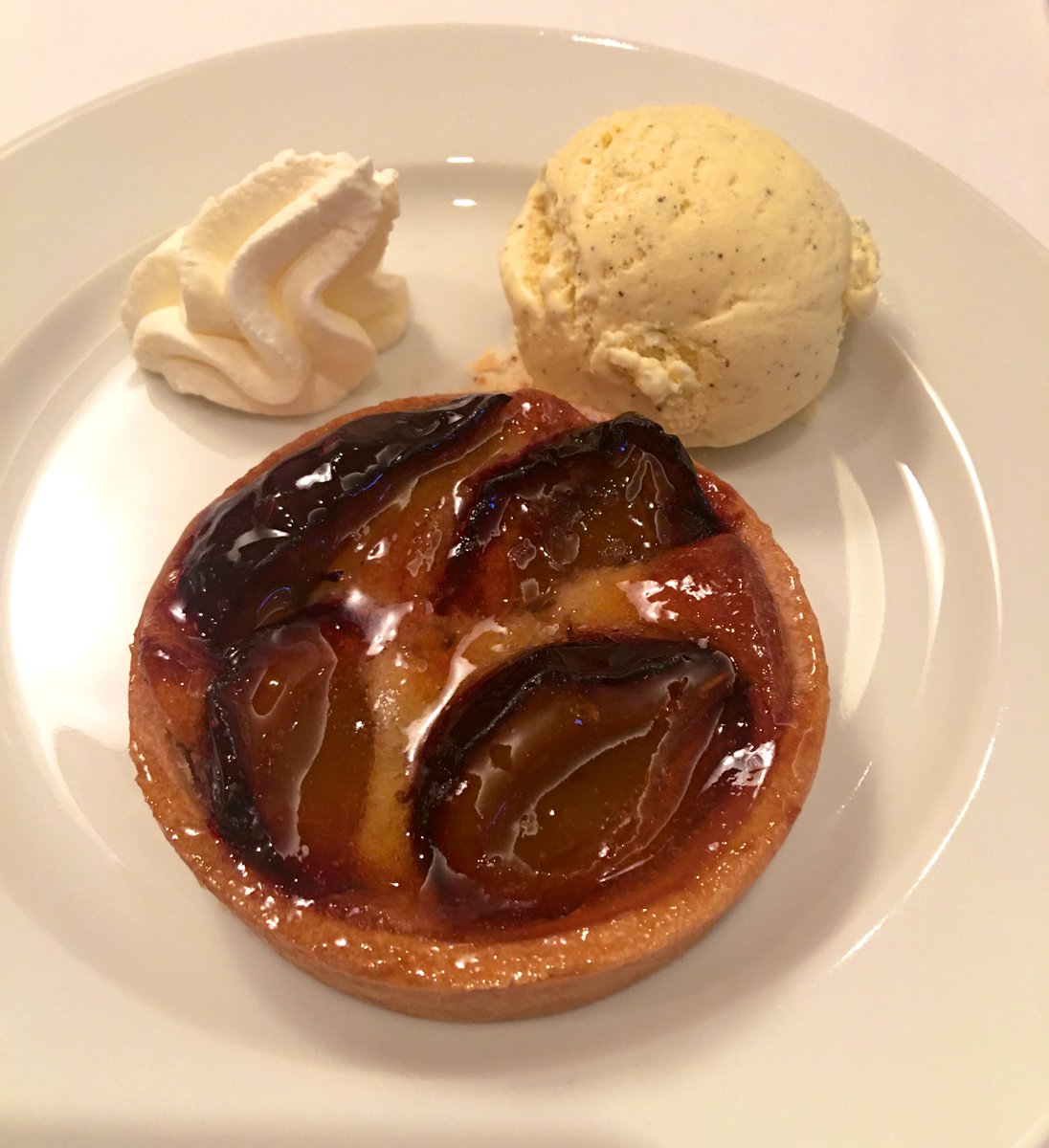 Lunch was great as always (and not only the dessert) and to avoid food coma we had the first time ignite talks at OSMC. It started with one from the conference sponsor ilert. Afterwards Blerim talked about “How Observability is not killing Monitoring” where he concluded that Observability should be an addition to Monitoring and not a replacement. Toshaan Bharvani decided for an ignite when sitting in the talk about Power Systems and wanted to add about “Building your own Datacenter” based on OpenPower and software available for it. In his talk “Overengineering your personal website” Bram Vogelaar showed a good (and funny) example where adding things to your infrastructure can escalate. 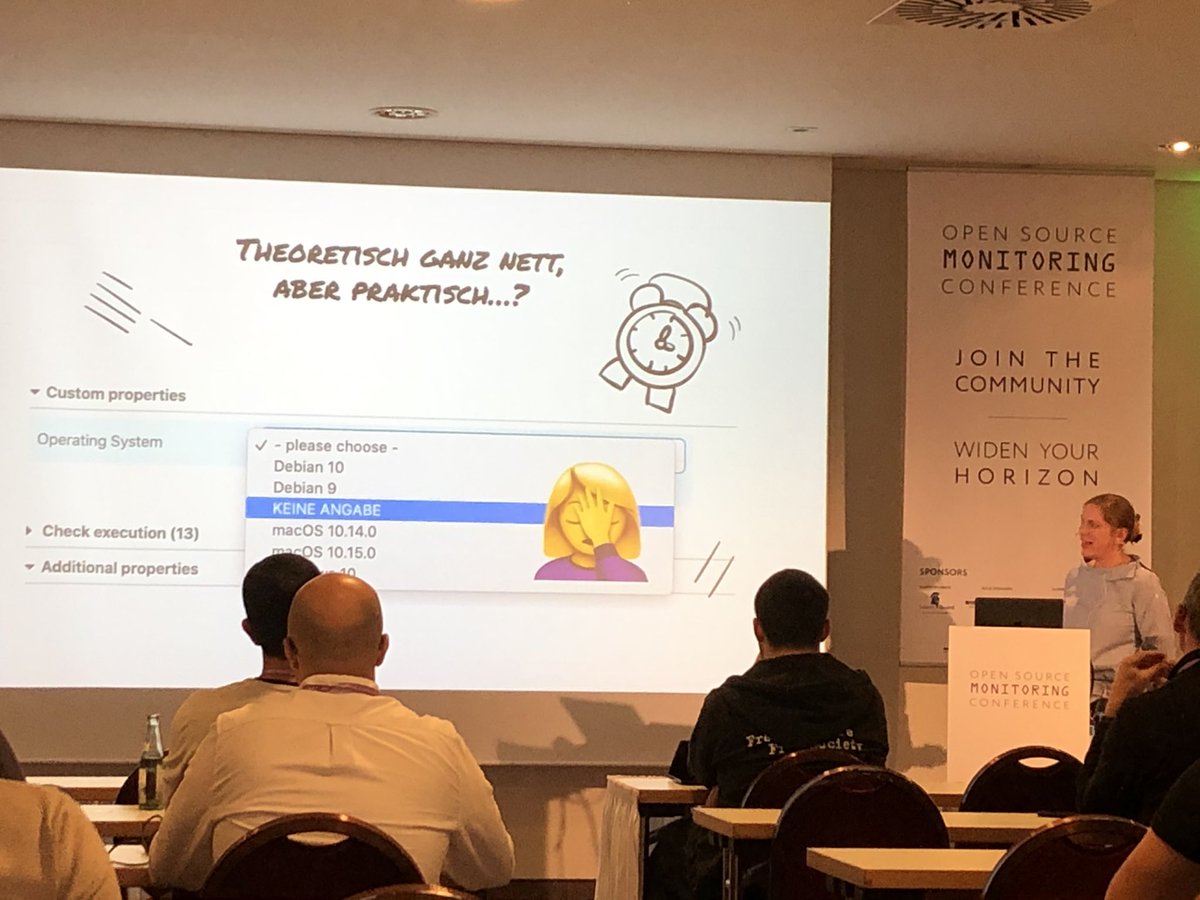 Marianne Spiller‘s talk “Lorem Icinga puppetdb director amet” was not only a must see because its creative title, but because I like the mix of humor and technical knowledge she always provides. With practical examples she showed the problems of manual work like lazy admins prefer introducing a “Not answered” to the datalist of operating systems instead of maintaining the information on hosts. So instead of a form manually filled by admins she ended using the import from PuppetDB to create monitoring objects based on facts of the system. 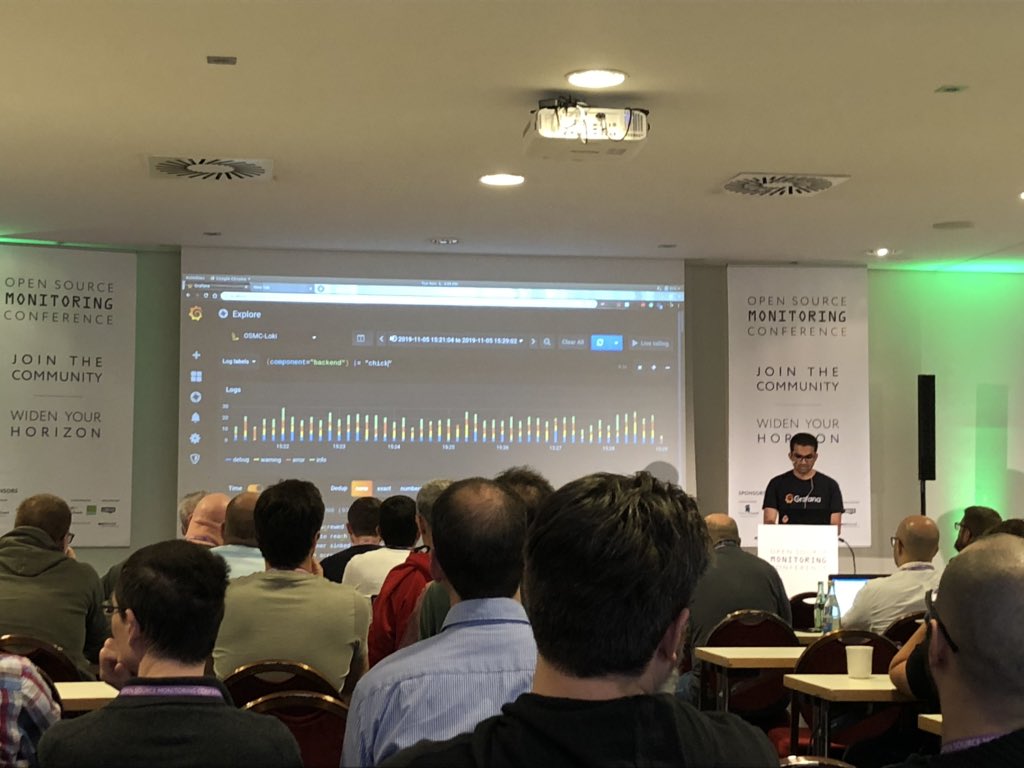 Directly from Grafana Labs represented by Ganesh Vernekar the audience got some news about Loki which is “Like Prometheus, but for Logs”. So Loki avoid huge indexes and allows for better scaling by not indexing log lines but grouping them to streams. Using a similar format to Prometheus it allows to get metrics and logs for a system without a context switch. Running Loki to get this seems quite simple and flexible with only one binary which can scale out easily and also allows for a microservice infrastructure. 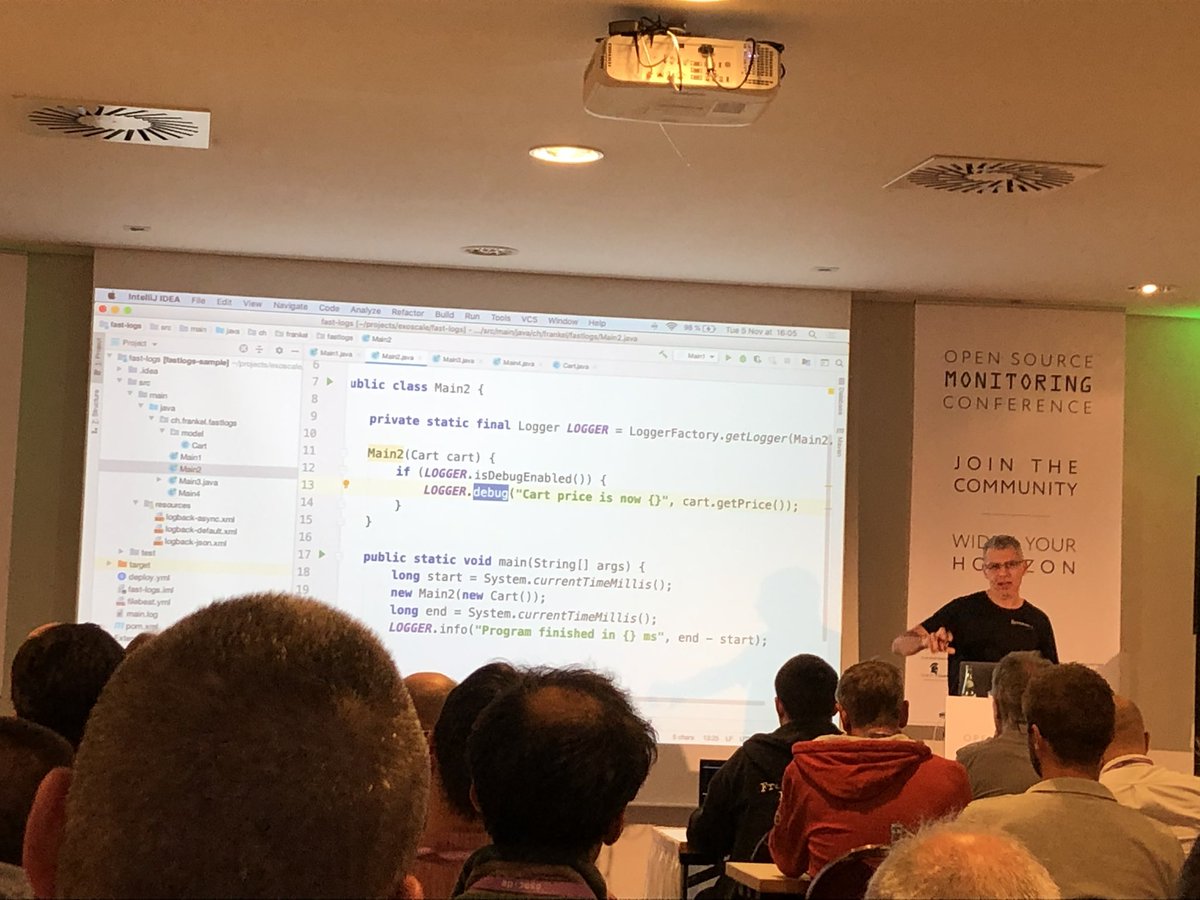 “Fast Logs Ingestion” by Nicolas Fränkel showed common coding mistakes and how to avoid them to get better logging in your application. He also covered topics like metadata and searching logs which also should also influence decisions and code. Structured log data even not written to file are also a option to consider like config reload during runtime to enable the user to switch loglevel without downtime. In the end he hopes people take away from his talk that everyone from dev and ops to architects should keep in mind which trade-off between speed and reliability has to be done and why.

Like every year the “Current State of Icinga” by Bernd was held in front of full house. He started with a short introduction to Icinga including the workflow which results in “Icinga makes you happy”.

Afterwards to start with technical things he looked into the big changes Icinga 2.11 brought with a new network stack, high availability for more features and a new process handling not only helping with containers. Icinga 2.7 brought more translations, markdown support, jQuery 3, modernized styling for forms and lists, color blind theme and improvements for module developers. The vSphere module provides now an Import Source for Director, no code depenency on the Director and some UI improvements. The latest version of Director has also more translation, support for scheduled downtimes and sync previews. The BP Modelling (formerly Business Process Modul) has now drag & drop, export and import and breadcrumbs to make the UI more usable. As the first new feature he introduced the Windows monitoring Christian gave a detailed talk earlier today. Icinga for AWS was an improvement to the one only providing a simple import source for Director which adds support for multiple sources, some property modifiers and sync previews. Icinga Module for Jira includes an Issue overview, Jira notification via Director integration and custom workflows you can create from Icinga Web 2. Icinga DB as replacement for IDO is decoupling status and historic data using Redis and in a demo the new monitoring module based on it was also shown including all the visual improvements. Pull requests are already merged and will be part of the next releases and new things are available separately. The next update you can get on IcingaConf in Amsterdam on May 12 – 14, 2020.

As last topic a open discussion about Code of Conducts suggested and moderated by Stefan Lange took place.

Pictures are taken from several twitter users tagging them with OSMC. Thanks for providing them, expect some better ones from my colleagues from the events and marketing teams. I hope you enjoyed my report for day 1 while I am heading over to the social event at the Loftwerk and try to have at least a short talk to everyone. Day 2 will be covered tomorrow evening.