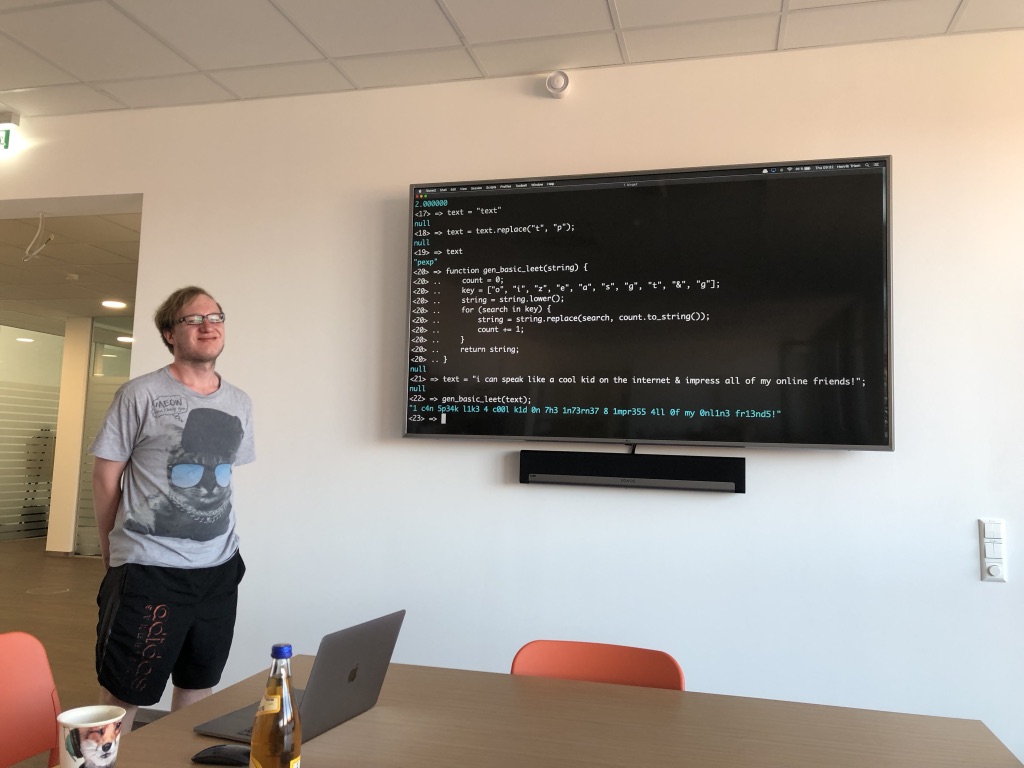 When my dev leads approached me with the idea to guide a trainee in the Icinga core topic, I was like … wow, sounds interesting and finally a chance to share my knowledge.

But where should I start and how can it be organized with my ongoing projects?

Prepare for the unexpected

My view on the code and how things are organized changed quite a bit since then. You cannot expect things, nor should you throw everything you know into the pool. While working on Icinga 2.11, I’ve collected ideas and issues for moving Henrik into these topics. In addition to that, we’ve improved on ticket and documentation quality, including technical concepts and much more.

My colleagues know me as the “Where is the test protocol?” PR reviewer. Also, reliable configuration and steps on reproducing the issues and problems are highly encouraged. Why? The past has proven that little to zero content in ticket makes debugging and problem analysis really hard. Knowledge transfer is an investment in the future of both NETWAYS and Icinga.

Some say, that documentation would replace their job. My mission is to document everything for my colleagues to make their life easier. Later on, they contribute to fixing bugs and implement new features while I’m moving into project management, architecture and future trainees. They learn what I know, especially “fresh” trainees can be challenged to learn new things and don’t necessarily need to change habits. 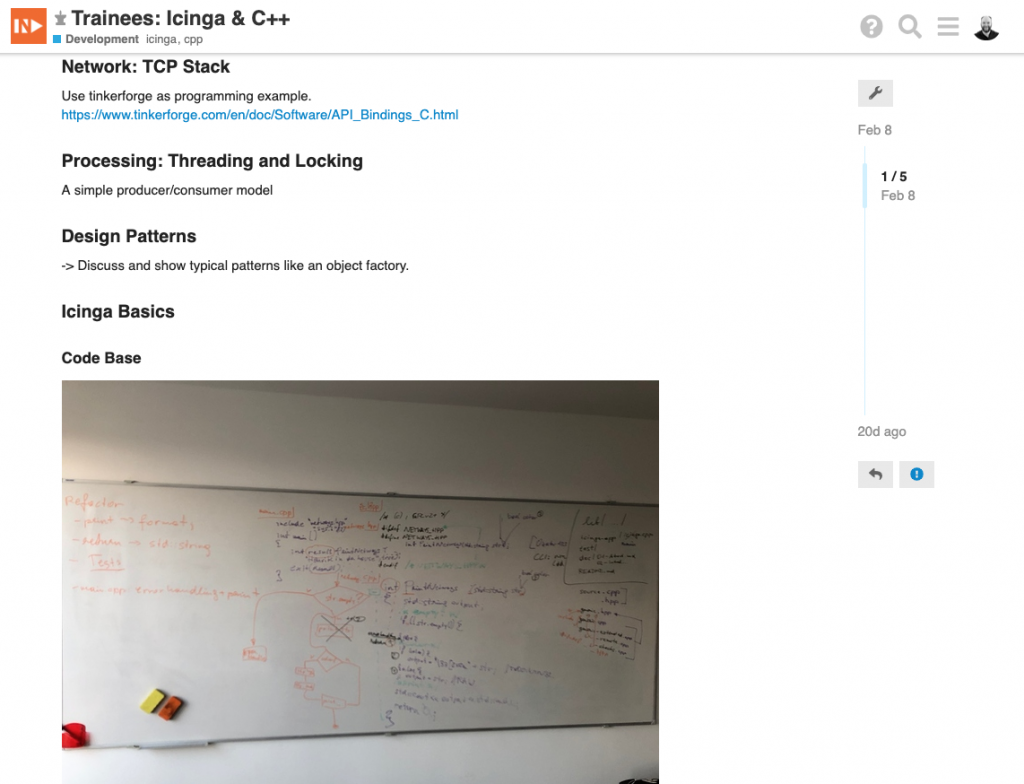 At the beginning, yes. Henrik started with the C++ basics, a really old book from my studies in 2002. C++11 is a thing here, still, the real “old fashioned” basics with short examples and feedback workshops prove the rule. Later on, we went for an online course and our own requirements.

Since Icinga 2 is a complex tool with an even more complex source code, I decided to not immediately throw Henrik into it. Instead, we had the chance to work with the Tinkerforge weather station. This follows the evaluation from our Startupdays and new product inside the NETWAYS shop. The instructions were simple, but not so detailed:

Documentation, a blog post and keeping sales updated in an RT ticket was also part of the project. Having learned about the requirements, totally new environment and communication with multiple teams, this paves the way for future development projects. 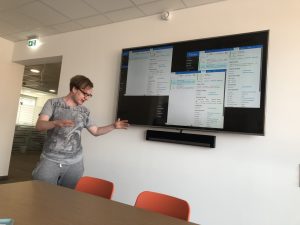 In order to debug and analyse problems or implement new features, we need to first understand the overall functionality. Starting a new project allows for own code, experiences, feedback, refactoring and what not. Icinga 2 as core has grown since early 2012, so it is key to understand the components and how everything is put together.

Where to start? Yep, visit the official Icinga trainings for a sound base. Then start with some Icinga cluster scenarios, with just pointing to the docs. This takes a while to understand, so Henrik was granted two weeks to fully install, test and prepare his findings.

With the freedom provided, and the lessons learned about documentation and feedback, I was surprised with a Powerpoint presentation on the Icinga cluster exercises. Essentially we discussed everything in the main area in our new NETWAYS office. A big flat screen and the chance that colleagues stop by and listen or even add to the discussion. Henrik was so inspired to write a blogpost on TLS. 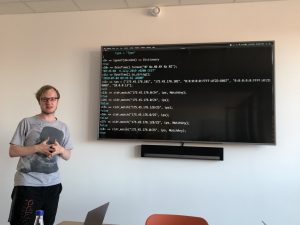 In the latest session, I decided to prove things and did throw a lot of Icinga DSL exercises at Henrik, also with the main question – what’s a DSL anyways?

Many things in the Icinga DSL are hidden gems, with the base parts documented, but missing the bits on how to build them together. From my experience, you cannot explain them in one shot, specific user and customer questions or debugging sessions enforce you to put them together. At the point when lambda functions with callbacks were on the horizon, a 5 hour drive through the DSL ended. Can you explain the following snippet? ?

We also did some live coding in the DSL, this is now a new howto on the Icinga community channels: “DSL: Count check plugin usage from service checks“. Maybe we’ll offer an Icinga DSL workshop in the future. This is where I want our trainees become an active part, since it also involves programming knowledge and building the Icinga architecture. 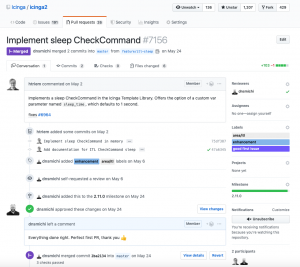 Henrik’s first PR was an isolated request by myself, with executing a check in-memory instead of forking a plugin process. We had drawn lots of pictures already how check execution generally works, including the macro resolver. The first PR approved and merged. What a feeling.

We didn’t stop there – our NETWAYS trainees are working together with creating PRs all over the Icinga project. Henrik had the chance to review a PR from Alex, and also merge it. Slowly granting responsibility and trust is key.

Thanks to trainees asking about this, Icinga 2 now also got a style guide. This includes modern programming techniques such as “auto”, lambda functions and function doc headers shown below.

There are many more things in Icinga: The config compiler itself with AST expressions, the newly written network stack including the REST API parts, feature integration with Graphite or Elastic and even more. We’ll cover these topics with future exercises and workshops.

While Henrik is in school, I’m working on Icinga 2.11 with our core team. Thus far, the new release offers improved docs for future trainees and developers:

Treat them as colleagues, listen to their questions and see them “grow up”. I admit it, I am sometimes really tired in the evening after talking all day long. On the other day, it makes me smile to see a ready-to-merge pull request or a presentation with own ideas inspired by an old senior dev. This makes me a better person, every day.

I’m looking forward to September with our two new DEV trainees joining our adventure. We are always searching for passionate developers, so why not immediately dive into the above with us? 🙂 Promise, it will be fun with #lifeatnetways and #drageekeksi ❤️

This entry is part 5 of 5 in the series Hip, hip, hurray - NETWAYS Anniversaries