While BTRFS is still considered experimental in some environments, it gets even more popular with Docker and CoreOS setups.
I did write a check plugin for a customer nearly 3 years ago called check_disk_btrfs which parses the output of “btrfs filesystem df /” and checks against given thresholds.
Over the years, the shell output of the the btrfs cli tool changed and so the plugin was broken. Code quality wasn’t good enough either in a retrospective and so additional feature requests were not added. 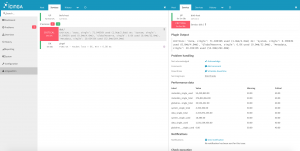 On Monday Blerim approached me with a question on monitoring the BTRFS filesystem and also told that the plugin was broken. Instead of fixing the old Perl code, I decided to just go for a new implementation in Python, our current language standard for development projects. It also makes usage of “sudo” optional, and parses the raw bytes output returned from the btrfs cli tool. An example for adding it to Icinga 2 is included as well.
You can download the current 2.0.0 release from Icinga Exchange, and of course sponsor or contribute a feature even. Tested on current OpenSUSE 13.2.