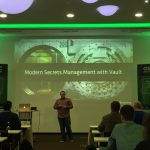 After a fully packed and entertaining first day at OSDC, we really enjoyed the evening event at Umspannwerk Ost. Warm weather, tasty food and lots of interesting discussions, just relaxing a bit and preparing for day 2 🙂

Grabbed a coffee and started with Julien Pivotto on Automating Jenkins. Continuous integration matters these days and there’s not only Jenkins but also GitLab CI and more. Julien told us why automation for Jenkins is needed. Likewise, “XML Everywhere” makes configuration a bit tad hard. Same thing goes for plugins, you literally can’t run Jenkins without. Julien also told us “don’t edit XML”, but go for example for Groovy and the Jenkins /script API endpoint. The Jenkins pipeline plugin even allows to use YAML as config files. In terms of managing the daemon, I learned about “init.groovy.d” to manage and fire additional Groovy scripts. You can use the Job DSL Groovy plugin to define jobs in a declarative manner.
Julien’s talk really was an impressive deep dive leading to Jenkins running Docker and more production hints. After all an amazing presentation, like James said 🙂

I decided to stay in MOA5 for the upcoming talks and will happily await the conference archive once videos are uploaded in the next couple of days.
Casey Calendrello from CoreOS led us into the evolution of the container network interface. I’m still a beginner with containers, Kubernetes and also how networks are managed with it, so I learned quite a lot. CNI originates from rkt and is now built as separate project and library for Go-built software. Casey provided an impressive introduction and deep dive on how to connect your containers to the network – bridged, NAT, overlay networks and their pros and cons. CNI also provides many plugins to create and manage specific interfaces on your machine. It’s magic, and lots of mentioned tool names certainly mean I need to look them up and start to play to fully understand the capabilities 😉

Yesterday Seth Vargo from HashiCorp had 164 slides and promised to just have 18 today, us moving to lunch soon. Haha, no – it is live demo time with modern secrets management with Vault. We’ve also learned that Vault was developed and run at HashiCorp internally for over a year. It received a security review by the NCC group before actually releasing it as open source. Generally speaking it is “just” an encrypted key value store for secrets. Seth told us “our” story – create a database password once, write it down and never change it for years. And the process to ask the DBA to gain access is so complicated, you just save the plain-text password somewhere in your home directory 😉
Live demo time – status checks and work with key creation. Manage PostgreSQL users and credentials with vault – wow, that simple? That’s now on the TODO list to play with too. Seth also released the magic Vault demo as open source on GitHub right after, awesome!

We had tasty lunch and were glad to see Felix Frank following up with “Is that an Ansible? Stop holding it like a Puppet!” – hilarious talk title already. He provided an overview on the different architecture and naming schemas, community modules (PuppetForge, Ansible Galaxy) and also compared the configuration syntax (Hash-Like DSL, YAML). Both tools have their advantages, but you certainly shouldn’t enforce one’s mode onto the other.

Puh, I learned so many things today already. I’ve unfortunately missed Sebastian giving an introduction about our very own NETWAYS Web Services platform managed with Mesos and Marathon (I rest assured it was just awesome).
After a short coffee break we continued to make decisions – previously Puppet vs. Ansible, now VMware vs. Rudder, location-wise. I decided to listen to Dr. Udo Seidel diving into “VMware’s (Open Source) way of Container“. VMWare is traditionally not very open source friendly, but things are changing. Most likely you’ve heard about Photon OS serving as minimal container host. It was an interesting talk about possibilities with VmWare, but still, I left the talk with the “yet another platform” feeling.
Last talk for a hilarious day about so many learnt things is about containerized DBs by Claus Matzinger from Crate.io. CrateDB provides shared nothing architecture and includes partitioning, auto-sharing, replication. It event supports structured and unstructured data plus SQL language. Sounds promising after all.
Dirk talked about Foreman as lifecycle management tool in MOA4, too bad I missed it.

"The usual intro applies: we are @netways, we are hiring, you know…all that jazz" – Dirk Götz at #OSDC pic.twitter.com/nj1hkCfxw4

Coffee breaks and lunch unveiled so many interesting discussions. Food was really tasty and I’m sure everyone had a great time, so did I. My personal highlights this year: Follow-up Seth’s talk and try Consul and Vault and do a deep dive into mgmt and tell James about it. Learn more about Ansible and put it into context with Puppet, like Felix has shown in his talk. As always, I’m in love with Elastic beats and will follow closely how to log management evolves, also on the Graylog side of life (2.3 is coming soon, Jan and Bernd promised).
Many thanks to our sponsor Thomas Krenn AG for being with so long. And also for the tasty Linzer Torte – feels like home 🙂

Thank you @netways for the exciting #OSDC conference and for (OPEN)powering open source /wf pic.twitter.com/xa8s7cNda9 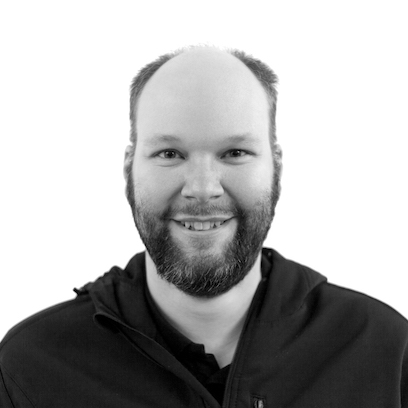 Time flies – 8 years Open Source Datacenter Conference (OSDC) already and now the 3rd time in lovely Berlin.
Kicking off with Dawn Foster’s keynote on Open Source – A job and an adventure gave an interesting insight into Open Source careers and living the spirit. As we do at NETWAYS since 1995 inviting everyone onto our journey and happily organising conferences for talks, chats & some drinks together.
And remember …

Next up was Kris talking about Another 7 tools for your #devops stack which is always fun to watch. I couldn’t decide whether to join him or go for Mike Elsmore on NoSQL is a lie … though Daniela approached me and said “go for Mike, it is funny”. And so it was in combination with the interesting technical questions asked.

Tough decisions already in the morning – we’re using CoreOS at NETWAYS too and so I could join Jonathan Bulle on rkt and Kubernetes: What’s new with Container Runtimes and Orchestration … or learning something new, moving away from Puppet and learn about Salt – A Scalable Systems Management Solution for Datacenters by Sebastian Meyer.
A pretty hard one also for the presenters as these talks ended right before lunch break – and as you might know already, food is always so delicious at OSDC.

Finding a place to chill after lunch (oh, it was delicious) should it now be What’s wrong with my Puppet? by Felix Frank or would I go for learning about some monitoring tasks with Hello Redfish, Goodbye IPMI – The Future of System Management in the Data Center with Werner Fischer. I guess I’m more with Puppet these days, less monitoring admin – and the live demo stuff somehow failed but nice to see David Schmitt helping out.

Ever since Elastic announced their Beats toolstack I wanted to learn more about it. I was pretty sad that I couldn’t join Elasticon earlier this year. So I was eagerly waiting for Monica Sarbu telling me more about Unifying Log Management and Metrics Monitoring with the Elastic Beats.

Having the Icinga stack in mind with open APIs and such, this shed interesting insights on how to further push integration with Elastic forward. Oh and I definitely need to learn Golang to hack my own beats based on the libbeat library.

Continuous Integration in Data Centers – Further 3 Years Later with Michael Prokop sounded interesting as well, especially when it comes to Jenkins and Docker integration. Luckily all talks are recorded and made available later in the conference archive so I decided to go for Elastic Beats this time.

Martin Schütte gave interesting insights into Terraform: Config Management for Cloud Services. This tool fits into the devops stack HashiCorp has been building over the last years, including Vagrant, Atlas and Otto. MySQL clusters are overly complicated in my (developer) opinion so I didn’t go for MySQL-Server in Teamwork – Replication and Galera Cluster presented by Jörg Brühe. Again one for the archive watchers 🙂

Now Martin Schütte is talking about @hashicorp #Terraform here at #osdc /be pic.twitter.com/Dck11TsW9t

ChatOps is becoming more important these days. I’ve already seen Martin’s great talk at Icinga Camp Berlin earlier this year – especially his live demo talking to the Icinga 2 API which makes me a proud developer. ChatOps – Collaborative Communication (or: You cannot not communicate) is definitely something everyone needs to consider and play around with. Especially when it is Open Source.

Heading over from Austria left behind my DNS related past though I’m trying to keep with it. Especially since Jan-Piet is talking about DNS for Developers aka “Everything is a freaky DNS problem” 😉

Now that we’ve learnt and discussed so much on the first day we are ready for the evening event. This time it located at Umspannwerk Ost which looks nice indeed. Looking forward to delicious food again and later on, some G&T with the OSDC gang 🙂