14 – 18 June warned Windows 2000 users of looming support freezes, gawked in awe at JIT, shared Julian’s LinuxTag presentation, introduced the SOAP and REST developer conflict and announced our first Icinga addon.
Reflecting on hot summer days in data centers, Jannis revealed Heatmap for Icinga. Now while enjoying ice cream, admins can view their server room and react quickly to temperature problems. With a drag and drop, servers and sensors can be laid out on the map and intervals for temperature processing set. Replete with dashboard, it integrates seamlessly into Icinga Web and is ready for download at netways.org as always.
We paid our respects to JIT (JavaScript InfoVis Toolkit) while Julian shared his presentation slides from LinuxTag in Berlin on Nagios and Icinga. He then went on to bring bad news to Windows 2000 users – as of 13 July 2010, Microsoft will end support for all Windows 2000 regardless of type. This means no free updates or security updates, which may also mean security problems will no longer be fixed. On the same day, normal support for Windows 2003 Server (and Server R2) will run out and only extended support will be provided. So only issues critical to security will be fixed, for all others a patch will be offered only to those in their paid support program. This extended support will be available to 14 July 2015- so it seems now is high time to switch out!
Finally, Bernd introduced his new series to tackle the SOAP or REST question which all developers inevitably face in service oriented development. He plans to look at both architectures in detail and compare their advantages and disadvantages. In the meantime he pointed to a previous post from Julian for a good starting point. Till then, keep your eyes peeled!

JIT – Javascript more Interactive Than ever

We are pretty excited to hear that JIT (JavaScript InfoVis Toolkit) developed by Nicolas Garcia Belmonte, has got a heap of new features coming in version 2.0. The coolest Javascript library we’ve come across, JIT makes viewing dry data like your server landscape, as mesmerizing as a rubric cube – you just can’t stop playing with it. 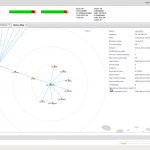 Ranging from radial layouts of tree directories, space trees and pie graphs in pie graphs, JIT has some ingenious ways of showing relationships between things. For example the Rgraphs allow users to click on nodes to zoom into, while adjusting the overall graph to still show its relationships to other nodes. Thanks to precisely this visualisation, which Icinga web developers have used for status maps – we can click between hosts and see the dependencies that exist.

We like JIT because it’s so easily extensible, all visualization classes can be added to or written over, and combined to create completely new views. It also displays well on all the popular browsers like Firefox, IE, Safari etc, and works well with any DOM manipulation framework – whilst being of course open source under BSD.
[youtube]//www.youtube.com/watch?v=CpXpAiZT1n0[/youtube]
Believe it or not as Nicolas promises in his JIT blog, graphs can get more dynamic than that – check out his sneak-peak videos of new zooming and panning functions, animated and interactive tree maps which allow nodes to be deleted and shifted around. Crazy looking stuff and we’re looking forward to it!