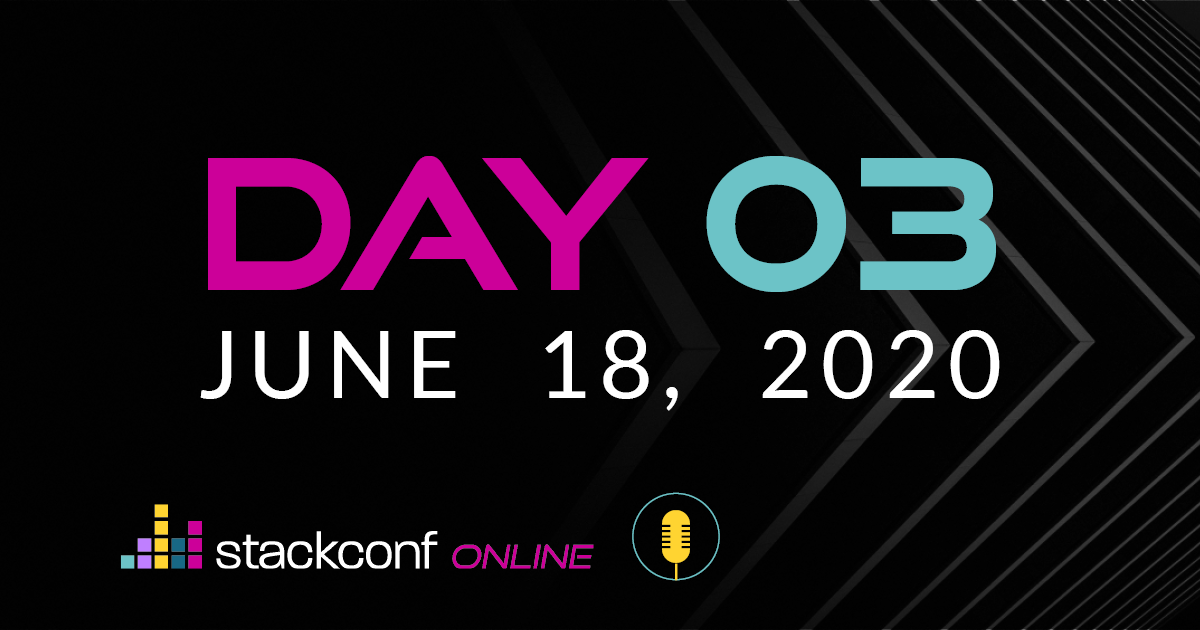 The final day of stackconf online has now come to a close. It has been a wonderful three days full of interesting talks, fun commentary and lots of learning!

Before I dive into the events of day 03, I want to shed some light on the evening event of day 02, which was all about socialising over long distances via the medium of video games:

For the evening event Christian and Bernd streamed Mario Kart 8 on the Nintendo Switch with an open party, so everyone could join in. We had a bunch of fun races and chats. Different people who were at the location took turns playing.

Starting into day 03 with three cups of coffee, as is customary after the night of the evening event, we got some useful tips about integrating security into DevOps. Jose Ortega talked about integrating security into iteration and pipeline application development with containers and how to secure development environments on top of general best practices.

Ignat Korchagin followed up with his talk “Speeding up Linux disk encryption”. He started off with the basics on encryption, explaining the different kinds and their pros and cons and built up from there explaining more in depth how one should secure ones’ data with LUKS/dm-encrypt.

Next up was Pooja Purswani, with her talk “WebThings: Let’s Make Your Things Smarter“. Contrary to what the title would lead you to believe, she pays special attention to the privacy risks in the web and smart devices. Pooja offers a way out with the current decentralised IoT project from Mozilla which focuses on improving interoperability, privacy and security through standardization.

After a short and entertaining break about electric scooters and how docker changed the world, Michel Schildmeijer took over the wheel with his talk “Replace your Docker based Containers with Cri-o Kata Containers for better security”. He gives us insights into the technology of kata containers and how they enable you to have all of the advantages of docker containers, with the added benefits of a more secure environment.

After the lunch break, the ignite talks provided a nice lightweight way back into the conference with their short and informative nature.
The first one “Opensource in Advanced Research Computing, How Canada did it !” by Mohamed Elsakhawy gave us an insight into how Canada’s Advanced Research Computing organizations deal with open source software.
Followed by my talk titled “Flying Blind – Accessibility in our Tools” where I tried to raise some awareness for visually impaired individuals and how they interact with the web.

The first full length talk after the break was submitted by Rain Leander. The title “Leveraging Procedural Knowledge: From Riding a Bike to Bare Metal Automation” already gives a good idea over what the talk was about: The rate at which people in IT have to deal with new tools and ideas is absolutely insane. The viewers learnt about how to engage with new technologies in an easier manner, by looking at what kind of knowledge you take over from other technologies.

The longer break here was again filled with interesting discourse about a diverse range of topics like horses, twitter voice posts and eco friendliness that were discussed with the audience via chat.

Keycloak and Managed Kubernetes made it round

“Securing Infrastructure with Keycloak” by Rahul Bajaj was all about authentication and authorisation and identity preservation. Rahul explained the different bits and pieces of Single Sign On technologies and the different layers involved. He also demonstrated how he implemented the stack in the Foreman project.

Joerg Schad presented “Challenges in Building Multi-Cloud-Provider Platform with Managed Kubernetes”. A lot of cloud services emerged over time, and building your service cloud-agnostic has grown increasingly difficult. Today, most cloud providers support Kubernetes based platforms. The talk tackled some of the issues you could encounter and how to avoid them.

All in all, I would say that the stackconf online was a really nice conference and managed to capture the spirit of a NETWAYS event rather well, despite there not being a physical location. If you haven’t been able to attend the conference live yourself, you can check out the recordings on YouTube. They should be uploaded soon!

stackconf online 2021 is over and was a full success. It was all about open source infrastructure solutions in the spectrum of continuous integration, container, hybrid and cloud technologies. We’re still excited about all of our experts sessions and the large number...

stackconf online 2021 is over and was a full success. It was all about open source infrastructure solutions in the spectrum of continuous integration, container, hybrid and cloud technologies. We’re still excited about all of our experts sessions and the large number...