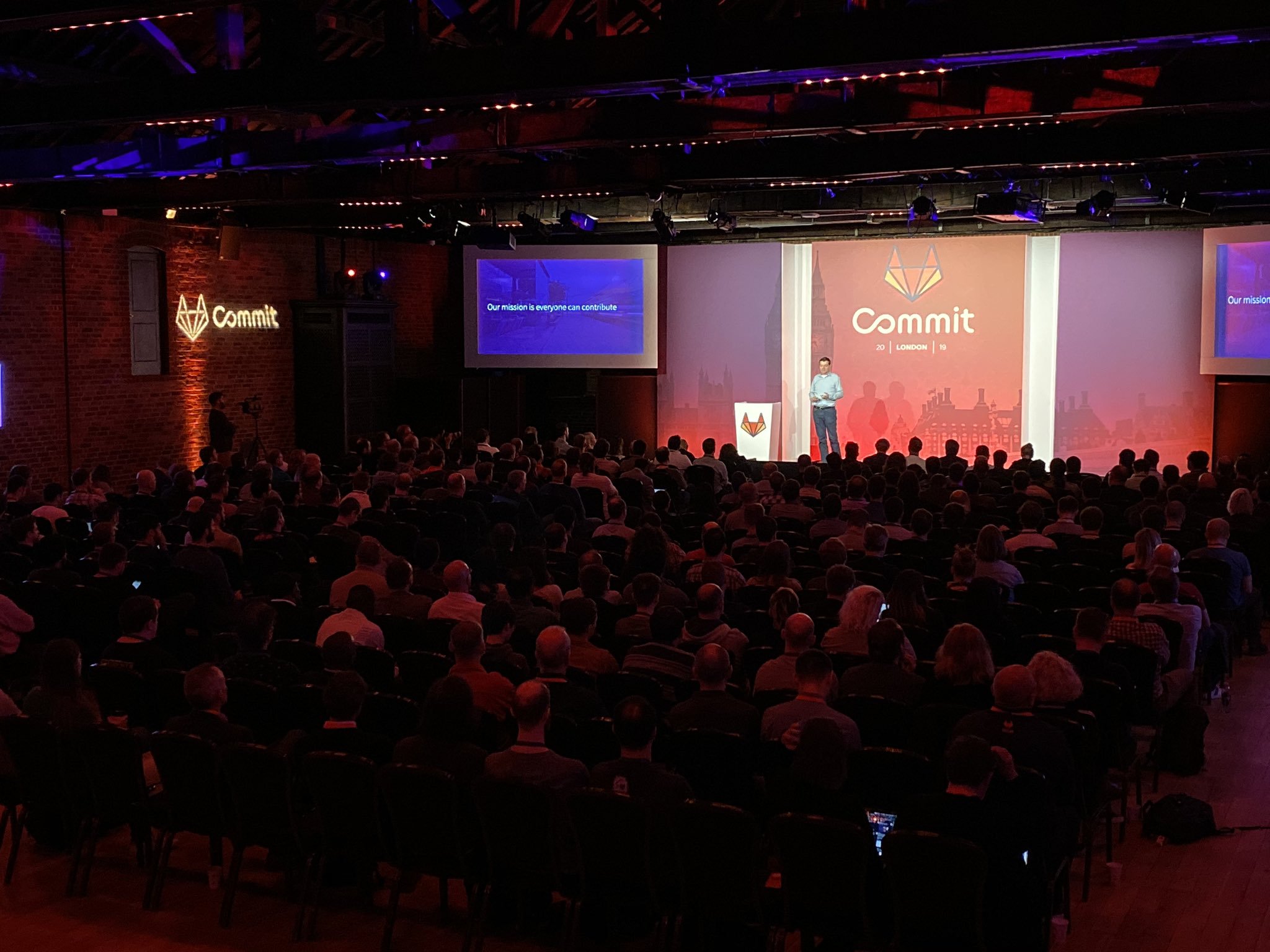 A while ago, when GitHub announced CI/CD for the upcoming actions feature, I’ve been sharing with Priyanka on Twitter how we use GitLab. The GitLab stack with the runners, Docker registry and all-in-one interface not only speeds up our development process and packaging pipelines, it also scales our infrastructure deployments even better. With the love for GitLab, we’ve also created our GitLab training sharing all the knowledge about this great tool stack.

Priyanka was so kind to invite us over to GitLab Commit in London, GitLab’s first European user conference. At first glance, Bernd and I didn’t know what would happen – turns out, this wasn’t a product conference. Instead, meeting new people and learning how they use GitLab in their environments was put into focus. Sid Sijbrandij, GitLab’s CEO, kicked off the event in the morning and after sharing the roots of GitLab being in Europe, he asked the audience to „meet your neighbour and connect“. Really an icebreaker for the coming talks and sessions.

The next keynote was presented by engineers from Porsche sharing their move to GitLab. With Java Boot Spring and iOS application development, and the requirement of deeper collaboration between teams, they took the challenge and are using GitLab since ~1 year. Interesting to learn was that nearly everyone at GitLab Commit uses Terraform for deployments. Matt did so too in his live coding session with a full blown web application Kubernetes container setup all managed and deployed with GitLab and Terraform. After 20 minutes of talking way too fast, it worked. What a great way of showing what’s possible with today’s tool stack!

One thing I’ve also recognized – everyone seems to be moving to Kubernetes and Terraform. Rancher, Jenkins and other tools in the same ecosystem seem to be falling short in modern DevOps environments. I really liked the security panel where ideas like automated dependency scanning in merge requests have been shared. Modern days with easy to use libraries typically pull in lots of unforeseen dependencies and who really knows about all the vulnerabilities? Blocking the merge request in case of emergency is a killer feature for current development workflows.

In terms of the product roadmap, GitLab has a huge vision which is not easy to summarize. On the other hand, having a maybe-not-reachable vision empowers a great team to work even harder. The short term improvements for CI are for example Directed Acyclic Graphs allowing parallel pipelines to continue faster. This will greatly enhance our package pipelines in the future. While tweeting about this, Jason was so kind to share the build matrix feature known from Travis coming soon with GitLab 12.6. Spot on, testing e.g. different PHP versions for the same job is greatly missed being as easy as Travis. GitLab Runners will receive support for ARM soon, and also Vault integration is coming. GitLab also announced their startup Meltano, an open source data to dashboard workflow platform – looks really promising.

The afternoon sessions were split into 3 tracks each, with even more user stories. Moving along from Delta with their many of thousands of repositories, we’ve also learned more about VMware’s cloud architects and how they incorporate GitLab & Terraform for deployments. Last but not least we’ve joined Philipp sharing his story on migrating from Jenkins to GitLab CI. Since we struggled from the same problems (XML config, plugins breaking upgrades, etc.) we were enlightened to see that he even developed a GitHub to GitLab issue migrator, fully open source. Moving to a central platform and away from 5+ browser tabs really is a key argument in stressful (development) times. Avoiding context switches for developers improves quality and ensures better releases from my experience.

Get the party started

The evening event took place at Swingers, a bar which had a Mini Golf playground built-in. We were going there with the iconic London Bus, and the nice people from GitLab even ensured that Gin&Tonic made this a great starter. Right after arriving, the fire alarm rang off and we had to move outside. Party like NETWAYS 😉 And finally we met Priyanka to say hi, lovely memory. We also met Brian, proud Irish, challenging us with funny stories and finding out that Germans do not know everything. Really charming and much to laugh.

Thanks GitLab for this top notch event and see you next year!