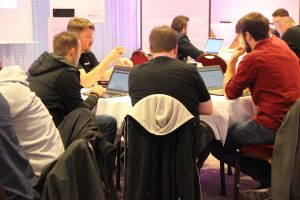 Our fourth OSMC hackathon started fully packed after an overwhelming conference – free form, and our introduction round provided many interesting topics to keep up with.
MQTT, OpenNMS, NSClient++, Elastic/Graylog, Migration from Nagios to Icinga 2, Zabbix, Prometheus, MySQL, ARM packages, Notification issues, Golang frameworks, Ansible, Puppet, Icinga Web 2 modules, Vsphere, Director, Maps, … holy moly, that’s super effective for just one day. Missed it? Join us next year!
Jens Schanz from Müller (Hint: The environment with 17k hosts and 200k services) mentioned a problem with missing notifications in his OSMC talk on Wednesday. So we did a deep dive in the production environment into one-time delayed notification without recovery for their ticket system integration. Turns out, that we’ve found a bug in Icinga, and also a quick workaround for production. Jens also knows how to use the debug console for future troubleshooting. Real #monitoringlove ❤️
Gian Arb from InfluxDB joined for the first hours, so “everyone who has questions, be quick”. Maybe he’ll stay longer next year, since he’s said that OSMC feels like home already. Rihards Olups shared Zabbix insights and focussed on improving MySQL monitoring. Our friends Tarus Balog and Ronny Trommer from OpenNMS looked into pushing sensor values into MQTT and OpenHAB, Tarus had his first success 🙂 Julien open-sourced an AMPQ adapter which forwards alerts from Prometheus.
Nicolai Buchwitz is building Icinga 2 for ARM hardware, and asked me to look into failing tests during the Debian package build. This turned out to be a very deep analysis with memory access violations and specific gcc and libstdc++ versions on this hardware, x86 works just fine. 50% are solved, more investigation needed.
Michael Medin implemented a huge new feature: Native Powershell support in NSClient++.  Cannot wait to see this being released! Dave Kempe started working on translation for the famous Icinga 2 book, together with Thomas Mr. Icinga Book. Or as they say: “Translating Austrian to Australian (English) …” 😉 Thilo jumped right into Jinja templates for the Icinga Ansible modules, and also offered help on enhancing the graph integration in mail notifications.
Noah and Jean played with the Gin library in Golang, providing an HTTP framework. They also discussed the state logic in Icinga 2 together with Eric and our friends from Syseleven, Max and Maurice. Max also did a deep-dive into new enhancements for Icinga Web 2 with more advanced scheduled downtime options. Together with Eric, he found a bug in the forms too. First time hackathon attendees discovered how to write Icinga Web 2 with the help from Eric.
The Map module for Icinga Web 2 received a docs patch from Jens, while Thomas Mr. Director looked into improvements for the business process module, Director, Cube (PR from Nicolai) and certainly the newly released Vsphere module. Last but not least, Flo was for the rescue and helped Jens to modify his Batman theme for Icinga Web 2. Dave also shared the color blind theme for Icinga Web 2 with Jennifer, and to mention too, Jean helped Jens with a DNS/network problem on Icinga startup.
It is INCREDIBLE what we achieved together as OSMC hacking family. We are never feature complete, always exploring and developing new things. See you next year, mark November 4th–7th, 2019 in your calendar!