A peek into GitLab 11, the Web IDE and Auto DevOps with Kubernetes

GitLab 11 was just released last week and introduces a bunch of new features. I’ve picked the most exciting ones for a short peek as our hosted production environment was already upgraded by Stefan 🙂

You can already add and edit files directly in your browser. Dirk mentioned this in his blog post, it motivates open source contributors to enhance the documentation. For larger changes we are used to fire up an IDE like Visual Studio, JetBrains Goland, PHPStorm, Atom, Eclipse, etc.
Sometimes you don’t need a full blown IDE, or you don’t have access to on your mobile device. It would be nice to have immediate results from build, compile and test stages, best in an isolated (container) environment.
The newly introduced GitLab Web IDE attempts to become a new player in the field. On the right you can already see the current pipeline job status from the latest commit. Once we’ve edited the file, we can commit (and push at once) and the CI will trigger a new job run. Just awesome! 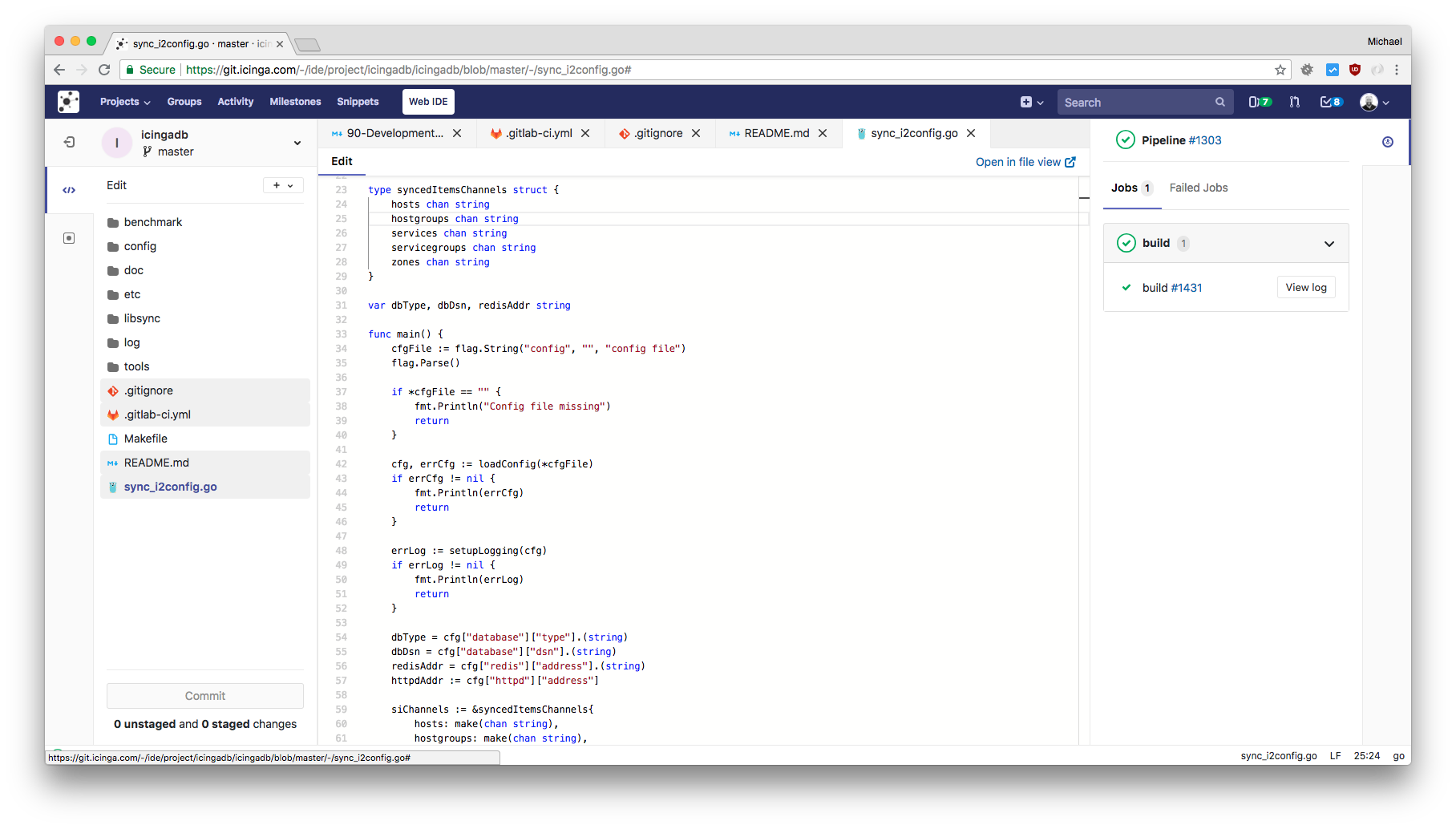 In its current implementation, the IDE is accessible from files view only, but the roadmap proves that there’s more to come on project creation. Just type t in the main project view and search for a specific file. Then pick Web IDE from the upper left bullets and rock on. There is syntax highlighting and code auto-completion included ❤️

Our vision is to replace disparate DevOps toolchains with a single integrated application that is pre-configured to work by default across the complete DevOps lifecycle.

Auto DevOps enables your CI/CD workflow to advance even further with pipeline container environments built on Kubernetes. GitLab provides its own Kubernetes integration, accompanied with default templates for projects and build pipelines. This isn’t limited to build, test, deploy stages but also includes a variety of additional stages: 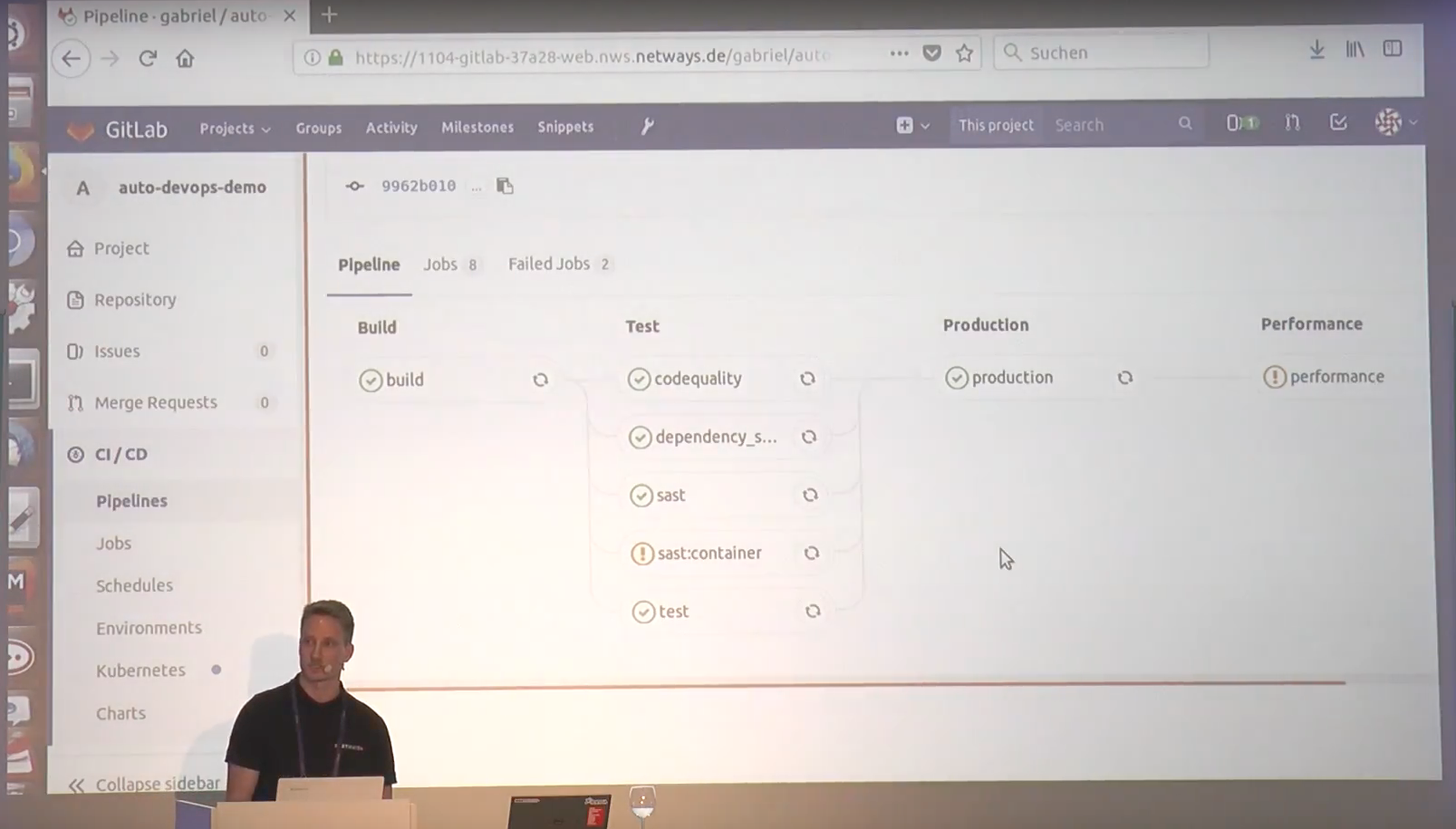 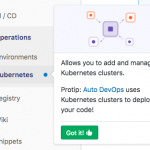 You can see the changes inside the menu where Operations was introduced and provides settings for environments and Kubernetes integration. This was previously found in the CI/CD section. A Kubernetes cluster can be assigned to a specific project, you can safely play and test without harming a global environment.
Nicole and Gabriel shared more insights into GitLab 11 features in their OSDC talk on “Git things done with GitLab!”. Check the archive for a live demo especially on the Auto DevOps feature, first time I fully understood its purpose 🙂

In terms of roles, GitLab renamed “Master” to “Maintainer”.

GitLab also decided to release the “Squash and Merge” option into the Open source edition. This feature allows you to develop a merge request in multiple commits, and upon merge back to master, it will automatically squash the commits into a single one. Want to learn more about git squash? We’ve got you covered in our GitLab training 🙂


I really hope that GitLab will also open-source Merge request approvals in future releases. This is something which we use for code review and release managed on GitHub on a daily basis and would enhance our GitLab flow too.
Still not enough? I’d love to talk GitLab with you in our upcoming training sessions, including the best development workflows from our daily work 🙂