Now for the fourth time OSDC started in Berlin with a warm Welcome from Bernd and a fully packed room with approximately 140 attendees. This year we made a small change to the schedule by doing away with the workshop day and having an additional smaller conference afterwards. The Open Source Camp will be on Foreman and Graylog, but more on this on Thursday.

First talk was Mitchell Hashimoto with “Extending Terraform for Anything as Code” who started by showing how automation evolved in information technology and explained why it is so important before diving into Terraform. Terraform provides a declarative language to automate everything providing an API, a plan command to get the required changes before you then apply all this changes. While this is quite easy to understand for something like infrastructure Mitchell showed how the number of possibilities grew with Software-as-a-Service and now everything having an API. One example was how HashiCorp handles employees and their permissions with Terraform. After the examples for how you can use existing stuff he gave an introduction to extending Terraform with custom providers. 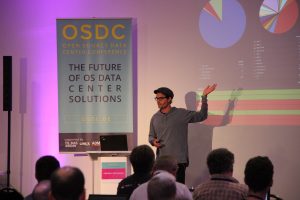 Second was “Hardware-level data-center monitoring with Prometheus” presented by Conrad Hoffmann who gave us some look inside of the datacenter of Soundcloud and their monitoring infrastructure before Prometheus which looked like a zoo. Afterwards he highlighted the key features why they moved to Prometheus and Grafana for displaying the collected data. In his section about exporters he got into details which exporter replaced which tools from the former zoo and gave some tips from practical experience. And last but not least he summarized the migration and why it was worth to do it as it gave them a more consistent monitoring solution. 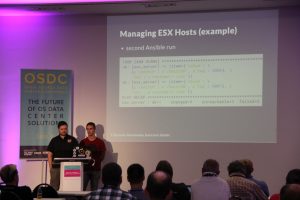 Martin Schurz and Sebastian Gumprich teamed up to talk about “Spicing up VMWare with Ansible and InSpec”. They started by looking back to the old days they had only special servers and later on virtual machines manually managed, how this slowly improved by using managing tools from VMware and how it looks now with their current mantra “manual work is a bug!”. They showed example playbooks for provisioning the complete stack from virtual switch to virtual machine, hardening according their requirements and management of the components afterwards. Last but not least for the Ansible part they described how they implemented the Python code to have an Ansible module for moving virtual machines between datastores and hosts. For testing all this automation they use inSpec and the management requiring some tracking of the environment was solved using Ansible-CMDB.
After lunch break I visited the talk about “OPNsense: the “open” firewall for your datacenter” given by Thomas Niedermeier. OPNsense is a HardenedBSD-based Open Source Firewall including a nice configuration web interface, Spamhouse blocklists, Intrusion Prevention System and many more features. I think with all these features OPNsense has not to avoid comparison with commercial firewalls and if enterprise-grade support is required partners like Thomas Krenn are available, too. 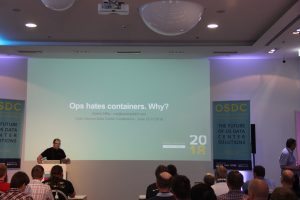 Martin Alfke asked the question “Ops hates containers. Why?” he came around in a customer meeting. Based on this experience he started to demystify containers in a very entertaining and memorable way. He focused on giving OPS some tips and ideas about what you should learn before even thinking about having container in production or during implementing your own container management platform. As we do recording I really recommend you to have a look into the video of the talk when recordings are up in a few days.
Anton Babenko in his talk “Lifecycle of a resource. Codifying infrastructure with Terraform for the future” started were Mitchell’s talk ended and dived really deep into module design and development for Terraform. Me being not very familiar with Terraform he at least could convince me that it seems possible to write well designed code for it and it makes fun to experiment and improve with your own modules. Furthermore he gave tips for handling the next Terraform release and testing code during refactoring which are probably very useful for module authors.
“The Computer Science behind a modern distributed data store” by Max Neunhöffer did a very good job explaining theory used in cluster election and consensus. The second topic covered was sorting of data and how modern technology changed how we have to look at sorting algorithm. Log structured merge trees as the third topic of the talk are a great way to improve write performance and with applying some additional tricks also read performance used by many database solutions. Fourth section was about Hybrid Logical Clocks to solve the problem of system clocks differing. Last but not least Max talked about Distributed ACID Transactions (Atomic Consistent Isolated Durable) which are important to keep data consistent but are quite harder to achieve in distributed systems. It was really a great talk while only covering theoretical computer science Max made it very easy to understand at least basic levels and presented it in way getting people interested in those topics.
After this first day full of great talks we will have the evening event in a sky bar having a good view of Berlin, more food, drinks and conversations. This networking is perhaps one of the most interesting parts of conferences. I will be back with a short review of the evening event and day 2 tomorrow evening. If you want to have more details and a more live experience follow #osdc on Twitter.