Vim is pretty great, honestly. But since I started using vim after growing tired of nano, a lot in my .vimrc changed… To the point where colleagues who use vim on their machine rather use nano on mine before trying to wrap their head around my workflow. Every .vimrc is different and a lot of them exist out there, over twelve thousand repositories of shared vim configurations on GitHub alone and many more on private laptops and computers.
Generally creating a .vimrc works like creating a Makefile: Copy and paste from different sources with small changes until you have an approximation of the desired result and then need to decide whether you want to go the extra mile of dealing with your configurations’ and Vims’ quirks to get it working properly or you just leave it be. This is followed by years of incremental tweaking until you have a Vim environment which works perfectly but you don’t know why. At least that’s how I do it ¯\_(ツ)_/¯
So I took a dive into my own to see what kind of madness lurks down there…

So far, so good. Nothing special. Other than that indentation is set and overwritten three times, this has not lead to any problems (yet). The next lines are a bit more interesting: 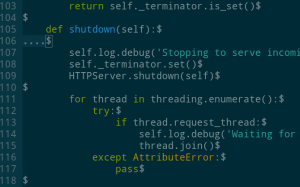 pathogen is a runtime manipulator which allows you to add additional plugins to Vim easier, in my case these are vim-solarized, a popular colourscheme, and vim-fugitive, a plugin that adds git commands within Vim. #infect() loads these plugins and #helptags() generates documentation. The following lines make use of solarized and add syntax highlighting.

This controls numbering and control characters, colorcolumn adds a ugly line over the 121’st char to keep up with coding styles. split tells vim where to add new views when splitting (I rarely use these) and viminfo sets the copy buffer to up to 1000 lines.
Now we get to the really interesting bits, key remaps! 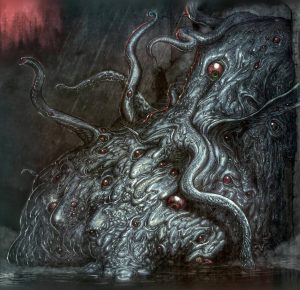 Artist rendition of the authors .vimrc

Switching windows can be hassle without the first four remaps, but again, I rarely use split windows. Mapping the up and down arrows to jump half a screen instead just one line I added to stop myself from using them instead of j and k, I have grown quite used to it, so it gets to stay ^_^
Buffer remaps are a must! Because I do use them a lot. There have been problems with Flake, a python lint tool, which I tried to avoid by remapping flakes key… Didn’t work out, so I got rid of Flake and call pylint when required instead.
The smart home key makes the <home>-key jump to the first non-whitespace char in a line instead of the begining of the line, quite handy!

These are just a few quality of life improvements, I tend to mistype :q as q: and :wq as :WQ. The :Wsudo command lets me edit read-only files and :Cpm is for easy mouse copy and paste. :Warnl jumps to the next line with more than 120 chars, this again is to check for style problems.
Alright, that’s it. My current .vimrc. There were a few commented out lines I omitted because I have no clue what I was thinking at the time anymore, but I hope there were a few little bits someone else might find useful to feed their own beast of a .vimrc with.
Image sources:
Vim logo from vim.sexy
Shoggoth by twitter.com/nottsuo