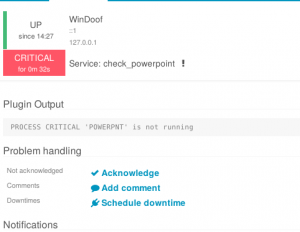 The need to to monitor arbitrary Powershell scripts comes up now and then and often there are some workarounds or alternatives, NSClient for example, named. However in order to have something I can link refer people to when the topic comes up again, I’ll try to provide a quick and simple to adapt solution. Keep in mind that this assumes you have Icinga 2 up and running on your Windows host, Powershell installed and are reasonably sane.
First the the check script I used for demonstration purposes in this case, all it does is check whether a process is running and returning OK or CRITICAL based on that.

Safe it as check_proccess.ps1 somewhere you can find it again. In this case I put next to the other check plugins.
The following are the check_command object and Service apply. And as it turns out it’s not that easy of a task as I thought, it’s mostly Windows fault really… Getting the exit code of a script from Powershell returned to icinga2 required some trickery (credit goes to NSClient for that one). The result is a bit of weird CheckCommand, which can and should be improved.