Contributing to projects on GitHub

Today I want to share my workflow for contributing to projects hosted on GitHub because I believe it works very well for me and I regularly contribute to various projects. Of course most of this also applies to other hosted Git platforms like GitLab. It will not involve any Git magic as there are other posts to do that. So let’s use adding a check command to Icinga 2 as my example.
The obvious first step is finding the Git repository for the project and reading contribution guidelines because there are some projects which aren’t hosted on GitHub and some have additional requirements like submitting an issue in addition to a pull request. You should always familiarize yourself with and stick to those policies if you want your pull request to be accepted. For Icinga 2 there currently aren’t any additional project-specific guidelines.
Your next step is to create a fork on GitHub and clone the repository. So in the GitHub web interface click on “Fork” and select your own account (or company account as long as you are allowed to push). Once you’ve forked the repository you can check out a local copy using the following command:

Afterwards you should add another “remote” for the original Git repository in order to be able to update your own repository with changes from the upstream project:

After these initial steps you can create a Git branch for your feature or bug fix. Using the “master” branch for pull requests is strongly discouraged because things tend to get complicated once you have more than one pull request. Another recommendation is to use branch names that match the upstream repository’s style. This however is not a hard requirement:

This also automatically switches to the newly-created branch which means you can now start to edit files for your pull request. Once you’re done you can add them to the Git index and create a commit. Typically upstream projects have guidelines for this, so do not forget to include documentation, make only one commit out of your work (perhaps by squashing) and so on.

Afterwards push your commit to your forked repository and then create your pull request using the GitHub webinterface:

When creating the pull request make sure to provide a detailed description of your changes and the reason why you feel that your pull request should be merged. Keep the setting checked to allow edits from maintainers. Depending on the project make sure to reference any related issues, fill in their pull request template or do whatever else they require for pull requests. 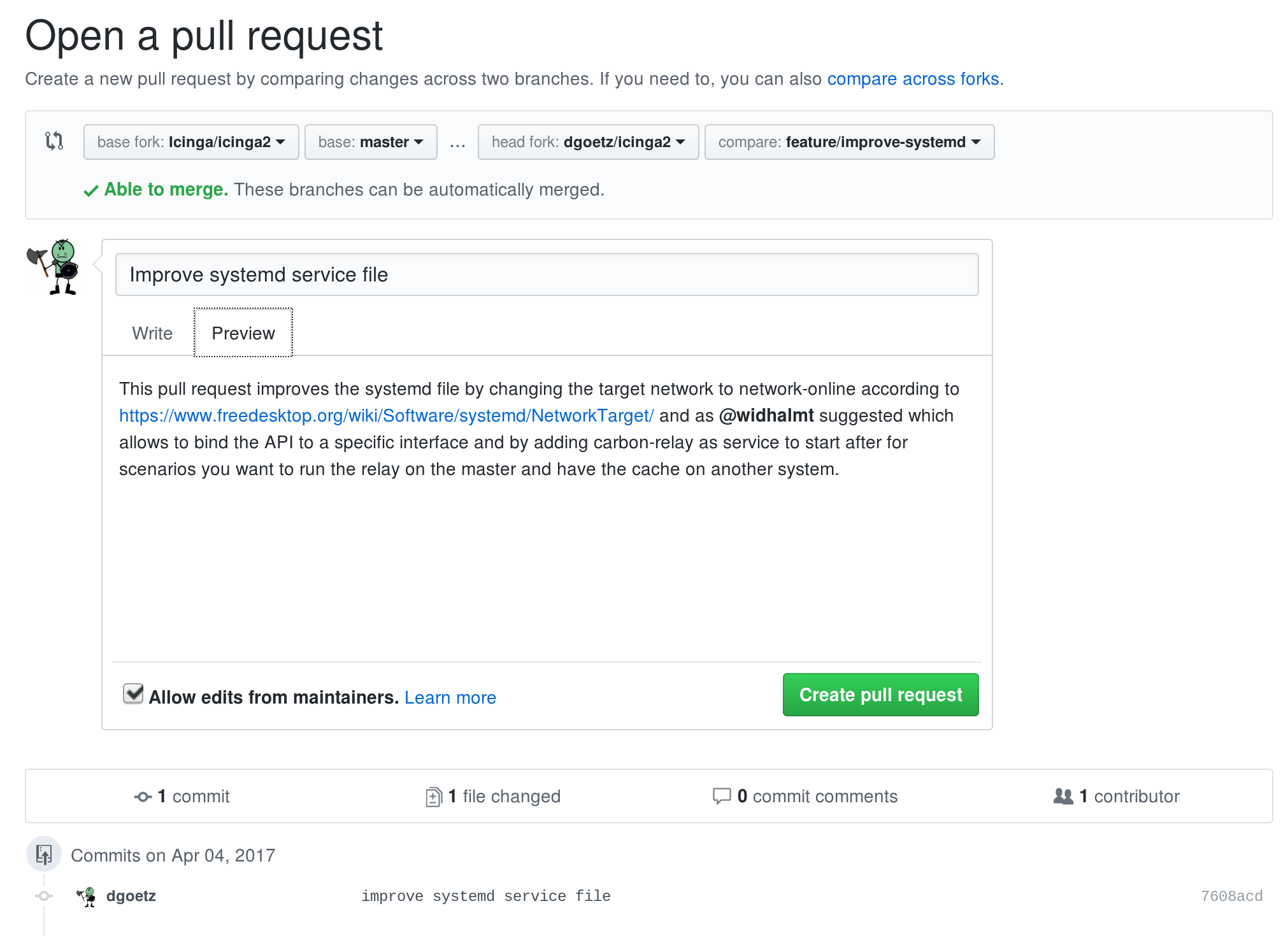 Typically once a pull request is created automated tests will be run and a review process by the project team will start, so it’s possible that you’ll be asked to make changes before your pull request is accepted. If this happens simply edit your branch to fix whatever problems were found during the review, amend your commit and force push it to your fork. This will also automatically update your pull request but you might want to provide a comment for the pull request as to what has changed:

Another commonly requested change is that you rebase your branch before the pull request is accepted. This usually happens when significant changes were made to the upstream repository while your pull request was waiting to be merged. In order to rebase your branch the following commands should be all you need, however in some cases you may also have to manually resolve conflicts:

And of course you will sometimes want to create additional pull requests. For these make sure to start with a new branch based on the upstream repository:

So, this is it, this is my basic workflow for easy contributions on GitHub. I hope it helps you to get involved with your favorite projects and your fixes and features to get upstream. If you prefer to do all step in the command line, you can have a look at GitHub’s command-line wrapper for git hub. If you need more general Git knowledge I recommend the Git book and our training. If you need a GitLab system to play around, have a look at our NWS platform.