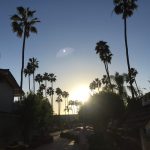 Heading to the US and PuppetConf the 5th year – this time, the NETWAYS folks moved to sunny San Diego. We had the annual Icinga Camp on Tuesday in the same venue as PuppetConf in the beautiful Town & Country Resort.
Bernd organised the entire trip – from flights to our lovely AirBnB, even going shopping (aka raiding) the local Walmart Neighbourhood market, cooking a meal for the hungry crowd. Last but not least – anyone flying over the US was offered the possibility to extend the trip with his/her vacation plans. Bernd, Julian, Lennart and Florian arrived earlier and so the other folks (Tom, Eric, Dirk, Blerim, Michael) joined them on Monday afternoon. 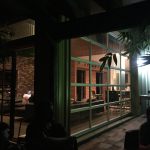 Guess what happened after getting onto the rental cars?  The first visit at the In-N-Out burger right around the corner at LAX. This round was on Bernd too, thanks a lot man! We agreed on visiting the AirBnb first, then looking for some food. Spaghetti and tasty salad accompanied with the obligatory G&T. Some of us were just chilling after an 11 hours flight, others still preparing for their Icinga Camp talks.
The next day we arrived at the PuppetConf venue – their brand was nearly everywhere although the room for Icinga Camp was a bit tad hard to find. Cosy warm and sunny weather and a full day of #monitoringlove. I’ll continue with details over at the Icinga blog soon.
Wednesday was sort of a free day for those attending PuppetConf. I went for Sea World with Lennart and Dirk, the others joined the beach. Unfortunately Bernd had to leave to Nuremberg so I was surprised with luckily attending PuppetConf. I’ve been learning and improving my Puppet skills in the past year quite a lot, also helped with our newly designed Puppet Open Source training sessions. Glad I could join this opportunity.
Therefore I’d like to share my experience with this year, also compared to previous events. To start with PuppetConf offered a delicious breakfast again on the first day. Bonus: Weather was hot and sunny, what a beautiful start into the day. The rooms for the sessions were loosely connected inside this building but still sometimes confusing. Everyone was friendly and in comparison to last year, you were not “marketing scanned” by Puppet folks everywhere. 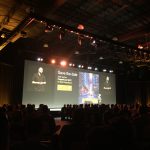 Nigel Kersten kicked off PuppetConf and also announced the date next year in SFO, 10.-12. October 2017. Then former CEO and creator of Puppet, Luke Kanies, started with his keynote. From container numbers (starting/stopping 1.58 * 10^10 containers over 3 years is a hell of a number) to open source commitment heard from Puppet CEO Sanjay Mirchandani. In case you haven’t been following closely, Puppet Enterprise got certain exclusive features not available in the community version. When it comes to server metrics available PE only I could imagine that community members are not amused (I wasn’t). Time for changes.
I decided to join the Github talk since it is always interesting to get insights into their operations management. Nearly everything is managed with HuBot. GitHub really is living the #chatops dream. Kevin Paulisse also talked about Puppet as culture, dealing with new contributors and then announced a new open-source tool: octocat-diff. This allows to compare Puppet catalogs and avoid deploying unwanted changes in production.
Everyone was really crazy about using Puppet to create and update Docker images. And so was David Lutterkort decoupling the challenges with containers and their management with Kubernetes into a fascinating talk. Note: That specific nginx demo was used everywhere 😉
“Making Puppet clean up its own mess” sounded provoking and so we went for it. You might be asking – which mess? Take for example changed configuration file locations generating collisions. “Write code to cleanup code” or “Use Ansible to cleanup after Puppet?”. Sounded funny but still can be a common approach instead of waiting for the Puppet agent’s 30 minute update interval. 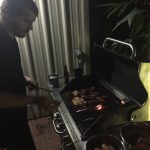 On Thursday evening the social event was happening from 6 to 8 pm. Hey, a NETWAYS party isn’t even started yet at that time 😀 And Jenny is waiting later at night, OSMC is near! From what the others told me, the location and food was great. Blerim and I decided to raid Walmart – again – and go for some barbecue together with the other folks not attending the conference. Florian took care of grilling tasty meat, and of course the drinks later on when the PuppetConf party people joined us again.
You would guess – no-one attends the keynotes on the second day. We made it, and listened to interesting insights into Microsoft’s plans on Azure with containers, Nano server 2016 setup plans and of course Powershell deployment strategies. Lots of things happening here, definitely worth keep watching.
During the keynotes the internet broke. Ok, actually Twitter was down so I couldn’t tweet about #puppetconf. The DNS DDOS even affected Puppet itself – livestream and forge were unreachable. Back in Germany everyone was sleeping but I guess some participants had to deal with their notification email stream rather than listening to sessions 😉
Martin Alfke gave a training session…ehm…talk about moving exec into types and providers. And everyone in the audience could follow and left the session both entertained and well trained. Since Blerim and I were pretty much into containers, management and also monitoring, we went for Gareth Rushgrove and him doing lots of demos showcasing Puppet and Docker. Did I mention the nginx demo already? 😉 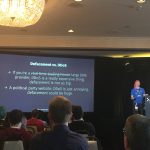 We were a bit undecided where to head for the last talk but then we saw Ben’s session “How you actually get hacked” differing from the usual Puppet suspects in topics. Oh boy, such sarcasm combined with actual matters of security. Ben, if you really lost your job, join NETWAYS. Will be fun 🙂
There were a couple of sessions talking about the transition from Puppet 3 to 4. Though it did not really feel that people are aware that Puppet 3 will reach EOL by the end of 2016. Most recently an interesting discussion on twitter started.
Compared to last year, PuppetConf including the session topics, venue and friendlyness nailed it this year. I’m looking forward to San Francisco next year – probably the best location to attract even more IT people. In case you’ve missed PuppetConf this year – their event archive including video recordings is already online.
We left San Diego on Friday evening spending two more days in lovely Los Angeles. Lennart, Dirk and I went for LEGOLand California, colleagues enjoined Venice beach. And then we got our rental car for our road trip to Grand Canyon and more. But that’s a different story … join the NETWAYS tour!
Enjoy some pictures we’ve taken during our NETWAYS “school trip” 🙂

Stackconf program: See what’s in for you

The stackconf program Since the open source infrastructure conference approaches with big steps, we proudly announce the completion of our three-day lecture program. We finally created our program awaiting you at stackconf online from June 15 – 17, 2021.   Our...

Speakers Line-Up We are approaching stackconf 2021 with big steps and our online event is enjoying a great response of outstanding talks. The program is taking more and more shape and we can already present a top-class, international speakers line-up.   3 days of...

Are you up-to-date in your field of Open Source that you're feeling confident in sharing your knowledge with an online audience? The latest topics related to Open Source infrastructures are no news for you anymore? Do you want to reach a big audience and represent...