What is NagiosGrapher?
NagiosGrapher is a Nagios add on which automatically generates performance charts and graphs from returned Nagios values. It takes the raw Nagios data and turns it into normalised values administrators can analyse, either on its own or Nagios’ web interface.
NagiosGrapher and NETWAYSGrapherV2 – what’s the difference?
They use a completely different architecture. NagiosGrapher is the predecessor to NETWAYSGrapherV2, but as it is so popular in the community, we decided to keep the project running. We’ve invested the latest technologies in the NETWAYSGrapherV2 however, and that is our main ‘grapher’ project.
How does it work?
Nagios plugins run checks on hosts and services, returning results in strings of extended information. The NagiosGrapher daemon receives these via perf-files or a pipe, filters them of numeric data by using regular expressions  and stores the data in a RRD (Round Robin Database). The functions we built use the RRD to create graphs from the data values and are generated on request – in real-time (or within 5 min). All interaction can be made on a Perl CGI based front end, or through the Nagios system itself.
Any interesting features? 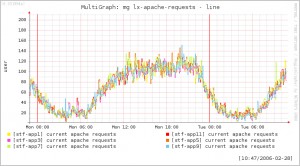 Aside from the real-time graphing as mentioned above, NagiosGrapher also does ‘Mulit-graphs’. Several different graphs can be brought together and displayed in one view, which is quite handy when analysing multiple switch ports for example.
NagiosGrapher also features a ‘process-service-perfdata’ interface, so no patches or changes to the Nagios system needs to be made. This ensures that it is easy to install and maintain. Unlike some other programs, you don’t need to repeat installations because it automatically recognises new devices and services, incorporating their monitoring values for graphing. And because it runs on RRD with automated data cleanup, the database stays at a fixed size, keeping the backend slim.

What is the ‘process-service-perfdata’ interface exactly?
This is an extra specialised interface between Nagios and the RRD where the returned Nagios performance values are normalised. Because it acts as a kind of translation device, no patches or alterations need to be made to Nagios itself, making installation and operation much smoother. 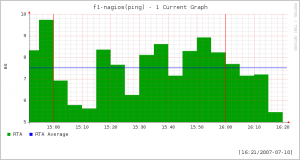 How does it compare to other graphing tools?
NagiosGrapher is one of the most popular, longstanding graphing tools for Nagios, alongside nagiosgraph and PnP. Where PnP is easier and faster to configure, it only reads perfdata. NagiosGrapher is more complex but can check older plugin output, and breaks into components easily, thus being also more flexible. This makes it fantastic to scale and implement in large environments.
Any plans for further developments?
NagiosGrapher has been around for quite a while now, but at least it’s reliably stable and very robust. Basically, we’ll keep with maintenance and patches but really our main development work is on the NETWAYSGrapherV2 – speaking of which, we have just released the RC1.
NagiosGrapher in a nutshell?
The old-timer basic Grapher for reliable performance charts, easy to install, easy to maintain and good for large environments – but not as dynamic as the new NETWAYSGrapherV2!
More information:
Join the project or download